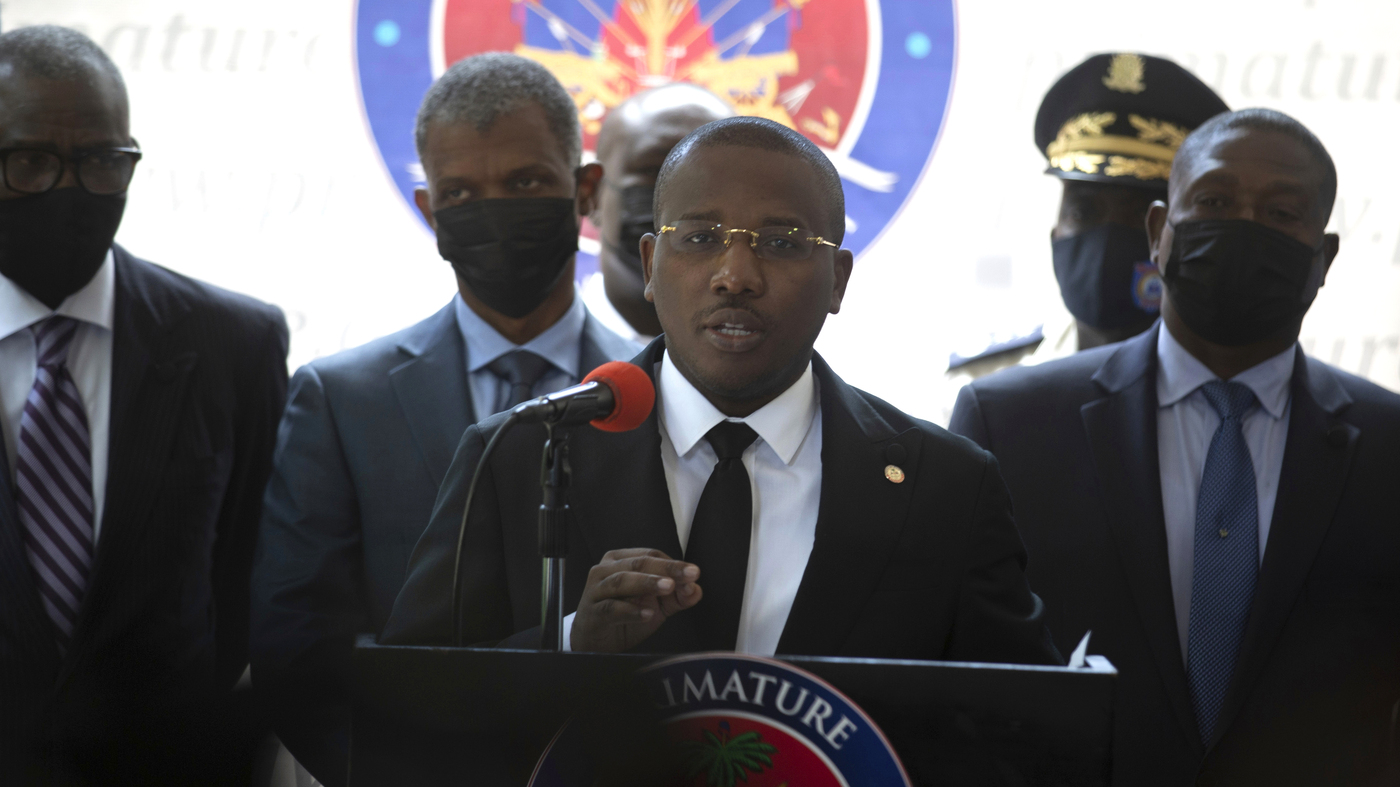 Haiti’s Acting Prime Minister Claude Joseph gives a press conference in Port-au-Prince on Friday, the week after the assassination of Haitian President Jovenel Moïse on July 7.

Haiti’s Acting Prime Minister Claude Joseph gives a press conference in Port-au-Prince on Friday, the week after the assassination of Haitian President Jovenel Moïse on July 7.

PORT-AU-PRINCE, Haiti – Martine Moïse, the wife of the slain Haitian president who was injured in the July 7 attack on her private home, returned to the Caribbean nation on Saturday after being discharged from a Miami hospital.

His arrival was unannounced and surprised many in the country of more than 11 million people still recovering from the murder of Jovenel Moïse in a raid that authorities say involved Haitians, Haitian-Americans and former Colombian soldiers.

Martine Moïse disembarked from the flight at the Port-au-Prince airport in a black dress, a black bulletproof jacket, a black mask, and her right arm in a black sling as she slowly made her way down the steps of what appeared to be a private. plan one by one. She was greeted by Acting Prime Minister Claude Joseph and other officials.

Earlier this week, she tweeted from the Miami hospital that she couldn’t believe her husband, Jovenel Moïse, had left “without saying a last word,” she wrote. “This pain will never pass.”

On Friday, government officials had announced that Jovenel Moïse’s funeral would take place on July 23 in the northern Haitian city of Cap-Haitien, and that his wife is expected to attend.

It came hours after a key group of international diplomats on Saturday appeared to snub the man who currently leads Haiti by urging another politician, the designated prime minister, to form a government in the wake of Moïse’s assassination.

Joseph has led Haiti with the backing of the police and the military even though Moïse had announced his replacement a day before the president’s death.

Joseph and his allies argue that the designated successor, Ariel Henry, was never sworn in, although he promised to work with him and with Joseph Lambert, the president of Haiti’s inactive Senate.

The statement was issued by the Core Group, which is made up of ambassadors from Germany, Brazil, Canada, Spain, the United States, France, the European Union, and representatives from the United Nations and the Organization of American States.

The group called for the creation of “a consensual and inclusive government.”

“To this end, it strongly encourages Prime Minister-designate Ariel Henry to continue the mission entrusted to him to form such a government,” the group said.

US officials could not be immediately reached for comment. A UN spokesperson declined to comment, except to say that the UN is part of the group that issued the statement. Meanwhile, an OAS spokesman said only the following: “At the moment, there is nothing more to say other than what the statement says.”

Henry and spokesmen for Joseph did not immediately return messages for comment.

The group also called for “all political, economic and civil society actors in the country to fully support the authorities in their efforts to restore security.”
Robert Fatton, an expert on Haitian politics at the University of Virginia, said the statement is very confusing, especially after the UN representative said Joseph was in charge.

“More confusion in a very confusing and puzzling situation,” he said.
The question of who should take office has been complicated by the fact that Haiti’s parliament has not been functioning because the lack of elections meant that the terms of most members had expired. And the head of the Supreme Court recently died of COVID-19.

A day after the assassination, US State Department spokesman Ned Price noted that Joseph was the incumbent and serving as interim prime minister prior to the assassination: “We continue to work with Claude Joseph as such,” he said.

On July 11, a delegation of representatives from the United States Department of Justice, the Department of Homeland Security, the Department of State, and the National Security Council traveled to Haiti. They reviewed critical infrastructure, spoke with the Haitian National Police, and met with Joseph, Henry, and Lambert in a joint meeting.