Momentum to expand the base by involving non-members, but is there any risk? - LaborList
Advertisement 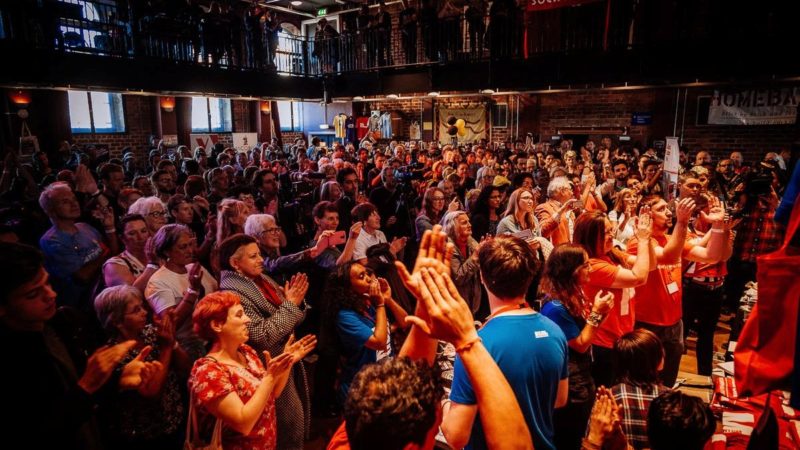 Momentum, the left-wing organization that grew out of Jeremy Corbyn’s first leadership campaign, aims to expand its fan base by better engaging non-members, LaborList can reveal. The group currently requires its members to also be Labor members. This is not going to change, but his National Coordinating Group (NCG) has decided to create a new supporter category that will encourage non-party members to get involved with Momentum, increase their participation, or keep it after leaving Labor.

Currently, there are two categories in Momentum: members, who have the right to vote (in political primaries, for example); and supporters, who do not have those rights. There are more than 100,000 Momentum supporters, according to LaborList sources. Over the weekend, the NCG voted to introduce a distinction between them: between supporters who are monthly donors and those who are not. The former will be classified as ‘affiliate supporters’ or similar and will begin to receive a specific offer that will be hybrid: they will not have the right to vote in the Momentum primaries, but they will be able to do more than sit on an email list. and donate.

Who will be in this new category of followers? Its creation will benefit those who want to actively support Momentum without being a Labor member. This could apply to those who drop out: those unhappy with Keir Starmer’s leadership but who want to play a role in the movement. It could also include those who have not recently joined Labor but are involved in outside work that Momentum wants to do – someone leading a local housing campaign, for example, for whom Labor membership is not a priority but could persuade. join the party eventually. The trickier aspect is that the new category could also attract those who have been suspended or expelled from Labor, or those who belong to a group banned by Labor.

This more uncomfortable feature is the reason some on the left are concerned that the move could increase the risk that the Labor Party will outlaw Momentum. At the last meeting of the Labor governing body, the party agreed to ban four small groups: Socialist Appeal, Labor in Exile Network, Labor Against the Witchhunt and Resist. Documents that reached the national executive committee (NEC) specified that supporters of these groups, rather than just members, would be automatically expelled from the party, showing that the Labor Party takes into account not just members, but also broader bases of support when evaluating organizations. Does this pose problems for Momentum, which now seeks to increase its extra-parliamentary work and involve non-members?

Supporters of the latest NCG movement don’t think so. They say that no member of the groups outlawed by Labor would be a member of Momentum, and point out that Momentum would still have stricter criteria for membership than organizations like Open Labor (which allows registered and affiliated Labor supporters, rather than just members, join). And of course, groups that support Labor, from Momentum to Labor First, can accept donations from people who are not members of the party.

However, how this decision affects the status of Momentum still depends on the detail of the new category, the reality of who is accepted as a premium supporter, and the degree to which there is an appetite among Starmer supporters at the top. of the party to outlaw the group.

IPCC report: ‘The future is in our hands’

As Delta expands, the Republican Party resorts to Trump’s demagoguery