Most Kentucky school districts do not require masks
Advertisement 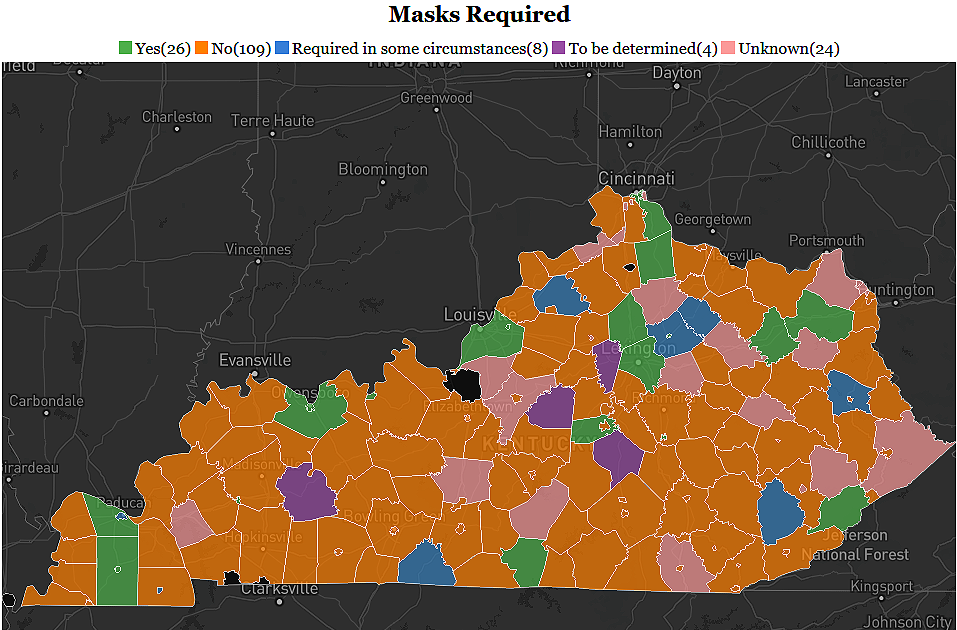 Nearly two-thirds of Kentucky school districts do not require masks in their buildings as the new school year begins, Jess Clark reports by WPFL in Louisville.

After examining the district’s websites and social media, Clark reports that “109 of the 171 Kentucky school districts have said they will not require masks,” while 26 will require indoor masking and eight will require it in some circumstances. “Four districts had yet to determine their policy, and two dozen districts had no information publicly available on their website or social media pages.”

The federal and state governments have recommended, but not required, that people who have been vaccinated against coronavirus and those who have not been vaccinated wear masks indoors. “Epidemiologists say, and studies show“The mask mandates have been effective in curbing Covid-19,” Clark notes. “Last year, the governor. Andy Beshear ordered masks across the state, including in K-12 settings, and faced a political backlash. This year, he has not issued a mandate.”

Beshear said last week, “It sends a much more powerful message than we just do here in Frankfort,” but added that he would “keep an eye on the numbers” and that a mask mandate “is by no means out of the question. “

“Some parent groups are using social media to organize against local mask mandates,” Clark reports. “The Facebook group Let them learn in Kentucky, which was formed in 2020 to oppose remote learning during the pandemic, has nearly 15,000 members. Now that all districts are required to teach face-to-face, the group has changed to oppose the mask requirements. “

Mask commands are more common in urban districts. In Knox County, in southeastern Kentucky, Clark reports that “teacher and parent Tammy Gray is frustrated that her district is not among those with mask mandates.” She told Clark, “As a mother and as a teacher, my goal is to keep my children, and that includes my students, healthy. And if it is necessary to wear a mask, I totally agree. I mean, why wouldn’t you want to protect these kids? I just do not get it “.