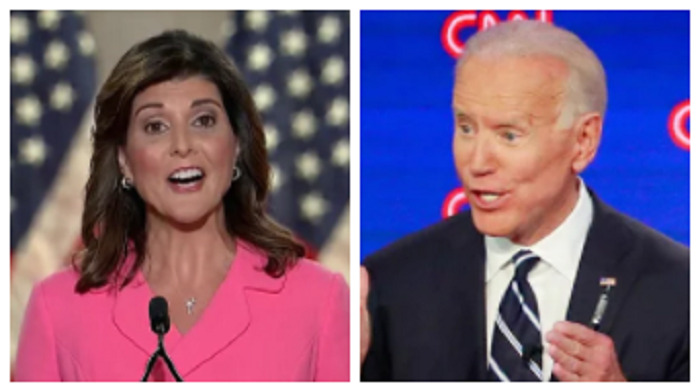 Nikki Haley, a former ambassador to the United Nations under Trump, believes older politicians should undergo a “cognitive test”.

The idea was born in an interview with the Christian Broadcasting Network, in which interviewer David Brody asked if Haley had any doubts about President Joe Biden in particular.

Rather than focusing on Biden, Haley suggested that Older lawmakers or White House occupants in general should undergo some sort of assessment, comparing it to the disclosure of their own tax returns.

“Well, what I’m going to tell you is that rather than talking about a person, we seriously need to have a conversation about the fact that if you want to have someone above a certain age in a position of power – be it the House, whether it is the Senate, whether it is vice president, president, you should do some kind of cognitive test “, he replied.

NEW ONE! @NikkiHaley he tells me that Joe Biden’s state of mind “makes everyone nervous”. Calls for mental health screening of all older politicians. “Let’s face it: we have many people in leadership positions who are old. And that doesn’t mean disrespect. This is a fact. ” pic.twitter.com/efDl0oQxTI

RELATED: Former Obama, Trump WH doctor believes Biden will be removed via the 25th Amendment or will step down

Nikki Haley, in suggesting a cognitive test for older politicians, noted that Congress is currently dominated by “people in leadership positions who are old”.

“This is no disrespect. This is a fact, “he insisted.

The Washington Post reported during the summer that the Senate, for example, is currently the oldest in American history, with several lawmakers well over 80 years old.

“And when it comes to that, this shouldn’t be biased,” added Haley. “We should look seriously at the age of the people who run our country and see if that’s what we want.”

After hinting that voters are confused, Biden summarizes a few points and says “… these are all things I’m running into …” Who’s confused? pic.twitter.com/c3tBRunSHI

The letter cited the president’s “mental decline and oblivion” and insisted that “the American people deserve absolute trust in their president.”

Popular podcast host Joe Rogan questioned Biden’s mental capacity at one point, suggesting “everyone knows he’s out of his mind”.

Joe Rogan on the current state of American politics: “We are shocked … We no longer have a leader in this country.” pic.twitter.com/0JvfzoVsFD

A poll earlier this month shows that a clear majority of American voters don’t believe the Biden administration is competent.

According to Quinnipiac, 55% of Americans believe the administration is essentially incompetent compared to only 42% who believe they can run the government.

Another NBC News poll a few days ago indicates that Americans “give” [Biden] low marks for competence and union of the country “.

Pollster Dem Hart: “What people voted for was stability and calm. What they got was instability and chaos. ” https://t.co/dtFiOfyDFX

Haley pointed out that Biden sometimes seems unaware of what is happening within his own administration. For example, the President’s apparent lack of awareness of fallout with France following the US nuclear submarine deal with the UK and Australia.

“[Biden] He asked me. He said, “What’s the situation?” And I explained that he wasn’t aware of it, “explained White House climate envoy John Kerry.” He literally didn’t realize what had happened. “

John Kerry admits in an interview with French TV that Joe Biden had no idea about the fallout with the French from the AUKUS sub-deal.

“He literally didn’t realize what had happened” pic.twitter.com/EblvE05zKg

While not wanting to rule out Biden, Haley says that such apparent unawareness on the part of the president makes people “nervous”.

“So it’s not the people who hate Biden, it’s Biden who really shows the country that he’s not totally in charge, and that makes everyone nervous,” added Haley.