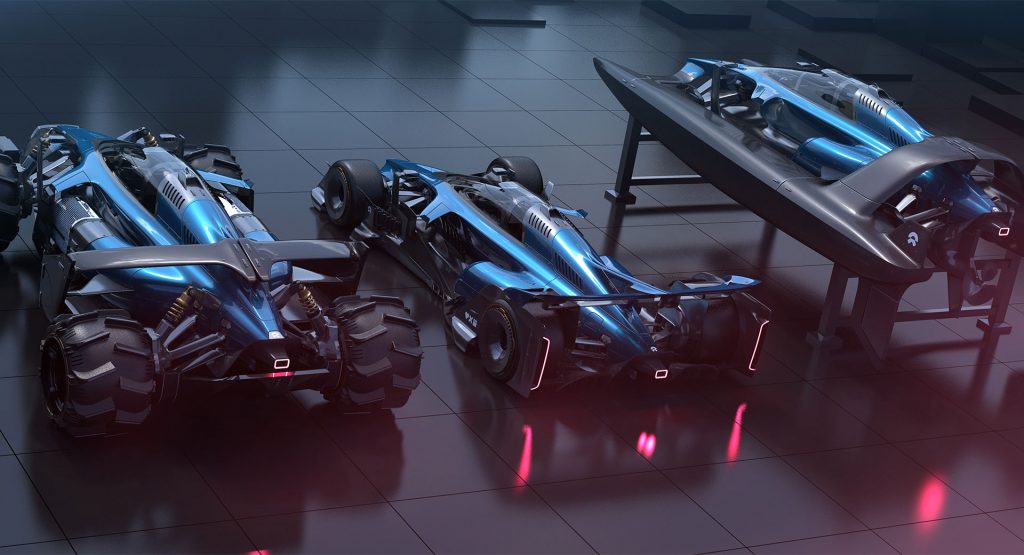 This article includes illustrations for an independent study done by designer Guillaume Mazerolle which is neither related nor endorsed by Nio.

Here at CarScoops, we love sharing renders from budding designers. This particular creation, dubbed the Nio Triathlon Concept, it could very well be one of the most extraordinary projects we have ever come across.

These images were kindly sent to us by the design Guillaume Mazerolle who is currently an external design intern at Nio. They represent a vehicle that could easily be modified from a Formula 1-inspired racing car to an Extreme E-style off-roader and even a high-performance hyperboat.

Read also: NIO brings battery swap to Europe as it launches the ES8 SUV and opens the first NIO home in Norway

Underlying the Triathlon concept is a complex cell / monocoque housing a centrally mounted cabin. When the car is in its Formula 1 and IndyCar derived “Sprint Mode”, it would be adorned with complex aerodynamic parts that include a large rear wing, complex front wing, wheel covers, aerodynamic bargeboards and complex diffuser.

These aerodynamic parts could then be removed when owners want to take the vehicle off-road. In their place sit huge wheels and tires similar to those used by Formula Offroad drivers. New external parts would also be used to protect the cell.

The third and final configuration is “Aquatic Mode”. This variant sees the Nio’s cell accompanied by a pair of floats that would have allowed him to plow through the water at high speed.

Mazerolle envisioned the Triathlon concept as using an all-electric powertrain designed to compete on purpose-built circuits that would include a large sprint track like those used in NASCAR, while the center of the track would be divided into an off-road track and an aquatic section.

Admittedly, this is an extremely unlikely scenario. However, if this is the (far distant) future aspect of fully electric motorsport, count on it.