No Sun Yang, but China eager to atone for 'worst Olympic failure'
Advertisement 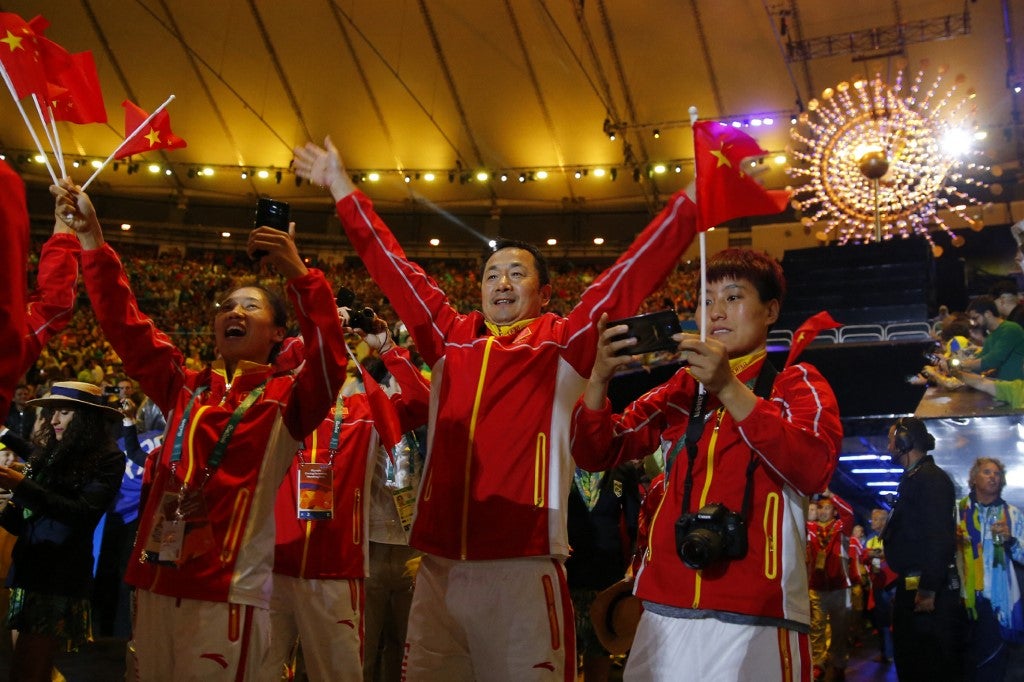 March of the Chinese team during the closing ceremony of the Rio 2016 Olympic Games at the Maracana Stadium in Rio de Janeiro on August 21, 2016. (Photo by Odd ANDERSEN / AFP)

China is missing banned superstar Sun Yang, but they will bring a record contingent to Tokyo in search of a solid performance with their own Olympics just months away.

The world’s most populous country topped the medal table at Beijing 2008, but then fell to third place behind the United States and Great Britain at Rio 2016, their worst Olympic performance in two decades with 26 golds.

The disappointment was summed up in a tweet from the state news agency Xinhua that read: “No gold for CHN gymnasts, China’s team suffered the worst Olympic failure in Rio 2016.”

At the Tokyo Games, which were delayed a year by the coronavirus and will finally open on July 23, China will have a giant team of 777 athletes and staff, its largest contingent at an Olympic Games abroad.

But if they want to improve in Rio, China will have to do it without its biggest star.

In its absence, China does not have an internationally recognized big name, but the country will still anticipate the aspiration of gold medals in diving, table tennis and weightlifting.

The Chinese media have described their divers as a “Dream Team” capable of taking all eight golds in the sport.

There are also high hopes for the women’s volleyball team, led by star forward Zhu Ting, and in the pool with Zhang Yufei.

The 23-year-old Zhang was called “the new queen of butterflies” by Chinese media after she soared back to the national swimming championships in May, winning five gold medals and one silver.

The Beijing Olympics is coming

FILE PHOTO: Staff members sit near a 2022 Winter Olympics poster board at the National Aquatic Center, known colloquially as the “Ice Cube,” in Beijing, China, April 1. from 2021. REUTERS / Tingshu Wang

China’s performances at the Olympics and place on the medal table are always a source of national pride, but this time there is a little more flavor due to the fierce historical rivalry between China and Japan.

Also, due to the one-year delay until the Tokyo Olympics, there are only six months between the Summer Games in Japan and the Winter Games in Beijing.

The 2022 Olympics in the Chinese capital will be looming immediately after Tokyo, especially when it comes to how organizers will deal with the coronavirus.

Sports blogger Ma Bowen is confident that China will rank second on the medal table in Tokyo, behind the United States, in part because Chinese athletes will feel more at home in family-friendly Japan than in Rio.

“Because the Winter Olympics are just around the corner, China will want good results (in Tokyo) to boost everyone’s enthusiasm for the sport,” added Ma, who has 800,000 followers on Weibo similar to Twitter.

“After the Chinese get the vibe in Tokyo, they will pay more attention to the Beijing Games.”

Like all athletes, China’s competitors have been badly affected by the coronavirus, restricted to national tournaments and training in safe “bubbles” in the run-up to Tokyo.

However, the state media have wanted to give the impression that they are advancing bravely with limited impact on their preparations.

Due to the repeated obstacles thrown by the virus, there will be a particular interest in the women’s soccer team.

The “Steel Roses” endured a tortuous classification campaign that quarantined and trained them in a hotel corridor in Australia in the early days of the pandemic.

After repeated delays and rescheduling, they finally sealed one last spot in Tokyo in April after defeating South Korea in overtime in a tense play-off.

Fittingly, China’s match winner was Wang Shuang, the Wuhan native who was stranded in the city when the outbreak emerged in late 2019.

F1 2021: Sainz will start in 10th place, Russel will be punished with three places and will start in twelfth place instead of ninth