Hollie Doyle ended a stunning Turf season with victory over favorite Farhan in the November Handicap in Doncaster on Saturday.

Well supported by the market at 9/2, John Butler’s exciting three-year-old – who started the race as a lower weight – pulled back to beat Calling The Wind and Sam Cooke.

Speaking on his exclusive pre-race blog, Doyle told Sky Sports Racing’s Simon Mapletoft that he had a “score to settle” after finishing second over Farhan in her first start of the season at Salisbury in May.

Having filled in second place on three more occasions this year, Farhan has finally done better with a good ride in the middle of the 23-person field on Town Moor.

After the race, Doyle told Sky Sports Racing: “He explained himself pretty well. We jumped well from a bad draw and it’s one of the races where you have to drive tight and I fired him there.

“We got a good lead and I could have come a little later to be honest. He listened and ran in front.

“He’s very progressive. I rode him early in his career and he was just a bit of a kid.

“John [Butler] it filled me with confidence and it was a great training performance.

“Today was his day. I knew what he was capable of but in these big handicaps you need a little luck and luckily I was on the best horse. Coach Ralph Beckett continued his remarkable record in the Listed Gillies Fillies’ Stakes by winning it for the fourth time in the last 12 editions of the competition with Vesela.

With a good ride from jockey Rob Hornby, the 22/1 shot seemed to enjoy the return to a mile and two stages, keeping the final challenge of David Elsworth’s Something Enticing at bay.

There was then a drama on paper for Hornby to be ousted from his mount in Henry Candy’s Listed Wentworth Stakes, Jouska. 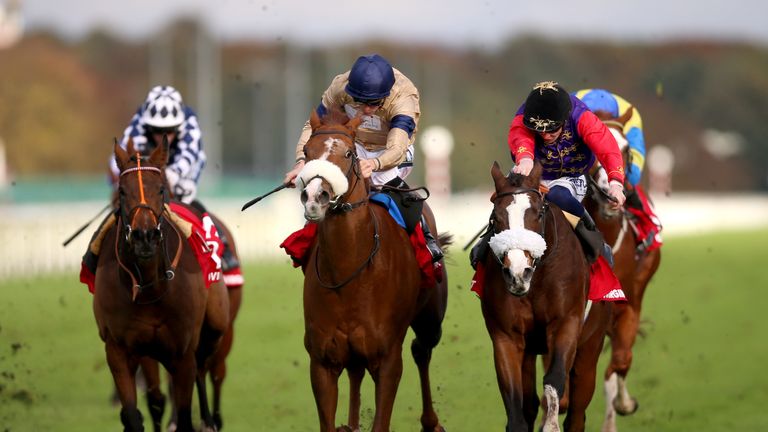 Coach Andrew Balding capped off a stunning Turf season with victory in the Listed Wentworth Stakes in Doncaster, courtesy of King’s Lynn

Another shot 22/1 went on target when the Boosala, coached by William Haggas, obtained for the two Virgin Bet Handicap class one of the three wins of the day for Tom Marquand, after also winning with Hebrides of Haggas and Wonderful World of Mick Channon.