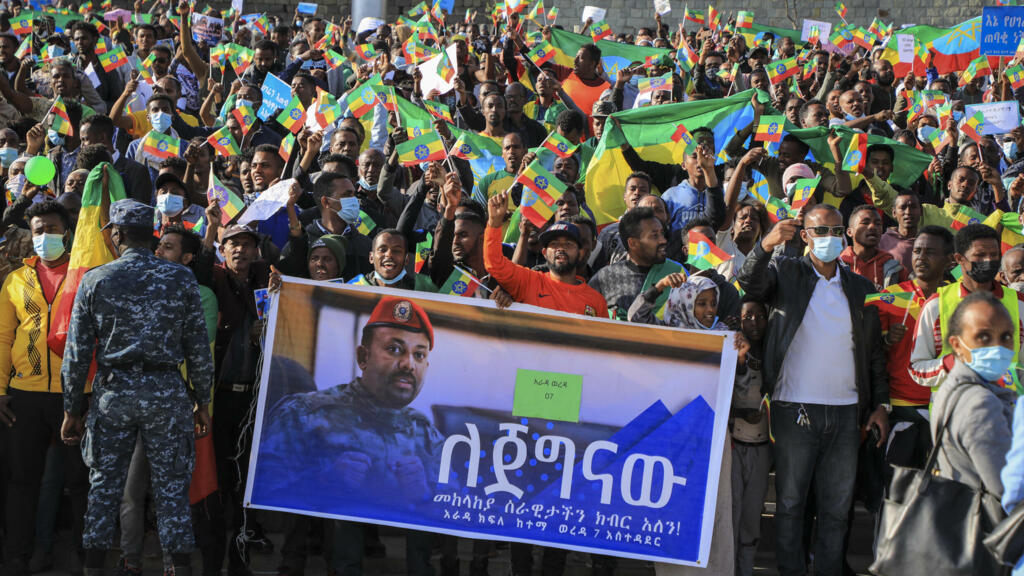 As the battle continues between Prime Minister Abiy Ahmed’s government and rebels in the Tigray region, tensions grow between Washington and its former Ethiopian ally. The Biden administration is now considering imposing sanctions on Addis Ababa, once viewed as a strategic and reliable partner in an unstable East Africa.

The situation in Ethiopia continues to worsen due to continuing fighting between pro-government forces and Tigray rebels. While the Tigray forces have taken over in recent weeks and are now approaching the capital, the federal government has launched a campaign against all international organizations still active in the country, including the United Nations, accusing them of collaborating with the enemy. On September 30, the government ordered the expulsion of seven UN agency officials accused of “interference”.

The United Nations announced Wednesday that 72 of its World Food Program (WFP) drivers were detained in a northern city, on the only road leading to Tigray, which is facing a serious threat of famine. The day before (November 9), at least 16 Ethiopian UN employees were arrested in the capital Addis Ababa.

Abiy Ahmed’s prime minister The government has stepped up its crackdown as the United States, which remained neutral, spearheaded diplomatic efforts to end the civil conflict for several months.

But now Washington is considering collecting new sanctions on Addis Ababa in the next few days or weeks, according to a senior State Department official. “We can use them pretty quickly,” the official told Reuters, speaking on condition of anonymity. “We will see in the coming days how things evolve”.

Ethiopia regards such measures as a betrayal by one of its closest allies.

Washington went from word to deed on Friday by imposing sanctions on the Eritrean military and other individuals and entities based in Eritrea for their roles in the neighboring Northern Ethiopian conflict.

“Eritrean forces operated throughout Ethiopia during the conflict and were responsible for massacres, looting and sexual assaults,” said a statement from the Treasury Department.

Both Asmara and Addis Ababa have denounced the move. “The real target of sanctions and further tougher action by the US government and the wider international community should be directed towards the TPLF,” the Ethiopian Foreign Ministry said in a statement, referring to the rebel group of the Front. of liberation of the people of Tigray.

Earlier this month, US President Joe Biden announced the exclusion of Ethiopia from the African Growth and Opportunity Act (AGOA) starting January 1, 2022. The measure was presented two weeks after Biden signed. an executive order that paves the way for sanctions, including the seizure of assets and the suspension of financial transactions of the parties involved in the conflict.

“Right now we are not imposing sanctions on elements aligned with the government of Ethiopia and the TPLF,” the main rebel movement, “to allow time and space to see if these talks can make progress,” said the US secretary of state. Anthony Blinken in a statement on Friday. He warned that the US would not hesitate to target both cities with future measures if diplomacy fails.

For Biden, the situation in northern Ethiopia “constitutes an unusual and extraordinary threat to US national security and foreign policy”, wrote in an executive order on 17 September.

Bilateral tensions have increased since May, when Washington introduced visa restrictions for Ethiopian and Eritrean officials accused of “failing to take significant steps to end hostilities”. At the time, the Ethiopian government had issued a warning, saying it would be “forced to reassess its relations with the United States, which could have implications beyond our bilateral relations.”

Although the Biden administration wants to increase pressure on Ethiopian leaders, it took seven months to implement these first concrete measures.

“The United States has an interest in maintaining good relations with Ethiopia. It benefits from a trusted and key regional partner in an area dominated by Saudi Arabia and the United Arab Emirates, of which Washington is suspicious,” said Gérard Prunier. historian specializing in the Horn of Africa.

Washington has long considered Ethiopia an important ally in the international fight against terrorism, especially due to its proximity to Somalia, where the Islamic group Al Shabaab linked to al Qaeda is based. So Addis Ababa has actively participated in United Nations missions providing large contingents of troops. The United States, on the other hand, is the largest donor of humanitarian aid to the country, with an estimated $ 1 billion a year donated by United Nations agencies.

The international community has been slow to react to the Tigray conflict in part due to its trust in Prime Minister Abiy Ahmed, who won a Nobel Prize for his role in ending the 1998-2000 war with Eritrea. After becoming the leader of a country in the throes of a political crisis and plagued by ethnic conflict in April 2018, the new prime minister implemented reforms to bring Ethiopia closer to its regional neighbor and rival Eritrea, ending a bitter war that killed tens of thousands of people. of people. The war officially lasted until the peace agreement of July 2018.

The peace agreement earned Ahmed the Nobel Prize in October 2019.

The youngest African head of government became a symbol of the continent and was soon courted by Western capitals. In March 2019, French President Emmanuel Macron praised Ahmed e’s modern reforms and courage signed a bilateral defense agreement. The deal was pending August 2021 with the intensification of the conflict in Tigray.

“The United States welcomed Prime Minister Abiy Ahmed’s arrival to power. It is true that the evolution of the situation puts them at odds, and not just with Washington. Many people have believed in him,” Prunier said of Ahmed.

“No one could have imagined that this political newcomer, promising openness and modernity, would suddenly launch a war to assimilate Tigray (which was officially a semi-autonomous region) which is totally incompatible with the reality of Ethiopian diversity.”

As Ethiopia celebrated the first anniversary of the Tigray conflict in early November, US Ambassador Jeffrey Feltman, Special Envoy for the Horn of Africa, posted a long piece on the State Department website stating that “the United States and others cannot continue ‘normal’ relations with the government of Ethiopia”.

“The extraordinary partnership we have enjoyed is not sustainable as the military conflict continues to expand,” he wrote, condemning the recurrent blockade of humanitarian aid to the famine-threatened Tigray and expressing outrage at the expulsion of “key United Nations officials” . Feltman strongly denounced the move, noting that there were “more UN humanitarian personnel expelled in a single day by the Ethiopian government than the Bashar al-Assad regime expelled in 10 years of war in Syria.”

“The United States has been very patient. That said, their expectations for Ethiopia are modest, because it is far from being a priority for them in the same way as China or Iran,” Prunier said. “But [the United States] he no longer has faith in Abiy Ahmed and hopes to find at least one functional ally. By imposing sanctions against the government, at a time when it seems to be losing the battle, we are planning for the aftermath, “he noted.

This story was adapted from the original in French.