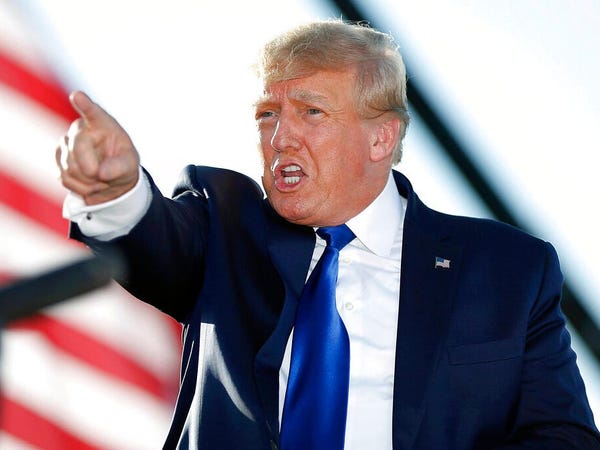 Republicans in Florida have a new Florida favorite they want to lead in the next White House bid.

That’s a reversal of a similar poll in January, in which Trump led DeSantis 47% to 40%.

“Donald Trump losing in a race with another Republican is a sea change,” David Paleologos, director of the Center for Political Research at Suffolk University, said in a statement.

Wednesday’s findings are significant given that during the 2016 primary, Trump easily defeated Sen. Marco Rubio on home turf, 46% to 27%, Paleologos said.

The results are for one state only, but they inject additional heat into one of the hottest topics in American politics: whether DeSantis would enter a presidential race against Trump, the man who carried him to the top of the Florida gubernatorial primary in 2018. .

DeSantis has not said whether he has the White House in his sights and whether he is up for re-election in Florida on Nov. 8. He will face Democrat Charlie Crist, who recently resigned from Congress and was Florida’s governor from 2007 to 2011, when he was a Republican.

That career looks promising for DeSantis. the USA Today/Suffolk University Poll projected DeSantis would win re-election with a 7-point lead of 48% to 41%.

The poll found a strong lead for DeSantis despite respondents reporting that they feel economic conditions in Florida have worsened, only 37% of voters said Florida’s economy was “excellent” or “good,” down 10 points from January.

Half of voters said they were “worse off” than four years ago, though the poll did not assess whether voters blamed the DeSantis or Biden administrations for their economic woes. It found that DeSantis had a higher approval rating than Biden in Florida, from 53% to 42%.

If DeSantis has a big lead over Crist, it would be a huge turnaround for the Republican governor. Just four years ago, he snuck into the governor’s mansion by just half a percentage point from Democratic challenger Andrew Gillum, the former mayor of Tallahassee.

Trump’s support is falling in his new home state

The poll shows that support for Trump may be declining, at least in the Sunshine State. The researchers conducted the poll by phone from September 15 to 18, surveying 500 voters.

Trump calls Florida his permanent home, though, as is his custom, he spent the summer at his golf course in Bedminster, New Jersey, and at Trump Tower in New York City.

The FBI raided Trump’s Mar-a-Lago Club in Palm Beach, Florida, in August and uncovered classified documents that Justice Department officials said Trump couldn’t have. On Sunday night, Trump wrote on his social media platform, Truth Social, that he had come to Mar-a-Lago to “see the scene.”

While Trump’s legal troubles have kept him in the news, DeSantis also frequently makes national headlines. The latest was last week when he directed state resources to transport immigrants from Texas to Martha’s Vineyard, Massachusetts.

The move appears to have caught the attention of Trump, who has made immigration restrictions one of his signature issues as president. On Saturday, Trump shared an Insider interview on Truth Social with Republican operative John Thomas, who said DeSantis would ruin his political career if he ran against Trump.

DeSantis’s frequent national headlines, massive fundraising and regular run-ins with the Biden administration have plenty of political speculation operative that he will run for the White House. Still, the conventional wisdom is that Trump would become the nominee if he mounted another campaign for the White House, something he has been joking about for more than a year.

It’s not clear that Trump can win against President Joe Biden nationally, though the poll found Floridians still prefer him to the current president.

the USA Today/Suffolk University Poll found that Trump would beat Biden in Florida 47% to 44% in a hypothetical matchup. The margins were even wider if DeSantis faced Biden, at 52% to 44%.

AlertMedia moves into HQ with airy design and skyline views

AlertMedia has just opened its new headquarters in the RiverSouth building, aptly named for being about a block south of Lady Bird Lake on...
Read more