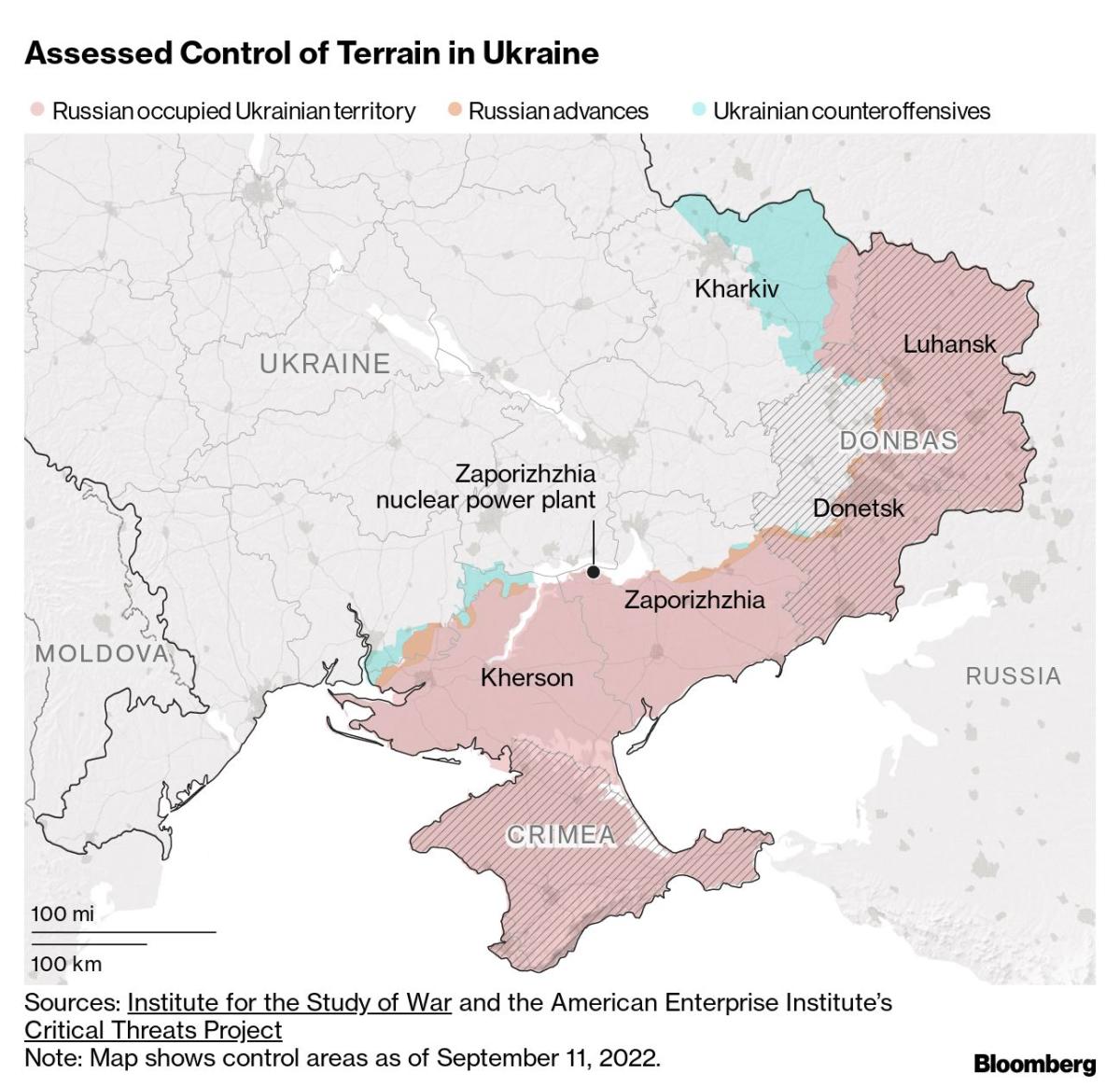 (Bloomberg) — Vladimir Putin will hold bilateral meetings this week with the leaders of China, India, Turkey and Iran, the Kremlin said, as the Russian leader seeks to use a summit in Uzbekistan to counter his diplomatic isolation.

Ukrainian forces have recaptured more than 6,000 square kilometers (2,300 square miles) in the east and south of the country so far this month, Ukrainian President Volodymyr Zelenskiy said.

Separately, Armenia accused Azerbaijan of shelling its territory as Blinken called for an end to fighting that threatens to undermine a Russian-brokered ceasefire. The fighting is the latest flare-up of tensions between the two neighboring Caucasus states since thousands were killed in a 44-day war over the disputed territory of Nagorno-Karabakh that was halted in November 2020 when Putin.

(See RSAN on the Bloomberg terminal for the Russia sanctions panel.)

Fighting continued in the south, with Ukrainian forces trying to push back Russian troops along the entire front line and prevent their attempts to improve their tactical position, the Ukrainian military said. Russian forces sought alternative ways to bring in weapons and equipment when Ukraine disrupted their supply lines, the Ukrainian Army’s Southern Command said on Facebook. The Ukrainian General Staff reported that Ukrainian forces repelled Russian attacks near Bakhmut and several other settlements in the Donetsk region. Russian forces are failing to reinforce the new front line after Ukrainian advances in the Kharkiv region and are actively fleeing the area or moving to other axes, according to the Institute for the Study of War.

Putin’s meetings with the leaders of China, India, Turkey and Iran will take place on Thursday and Friday in Samarkand, where leaders of the Shanghai Cooperation Organization hold a regular summit. Chinese President Xi Jinping will make his first trip outside his country in more than two years.

Some 50 municipal lawmakers from various parts of Russia have so far signed an open letter calling for Putin’s resignation. The petition says it is “harming the future of Russia and its citizens.”

One of the co-organizers, Dmitry Baltrukov, said that the number of signatories from Moscow, St. Petersburg and other cities has been steadily growing.

Public support for the six-month war in Ukraine remains high at 76%, compared to 81% in March, according to the latest independent Levada Center poll conducted in late August.

The Kremlin warns nationalist bloggers about criticism of the war (2:15 pm)

Kremlin spokesman Dmitry Peskov sent a warning to nationalist bloggers who have become more critical of the performance of the armed forces in Ukraine. “As long as they stay within the law, that’s pluralism,” Peskov said in a conference call. “But the line is very, very fine and one has to be very careful here.”

Since the February 24 invasion, authorities have allowed widespread commentary on the war effort by nationalist writers who have gained a large following on Telegram. But as Russian forces have faced setbacks in recent weeks, writers have openly attacked the military’s handling of the war, often calling for more aggressive tactics.

The Kremlin has shown little tolerance for questioning the war effort by opponents of the invasion, imposing heavy fines and even jail terms on those who violate a sweeping new law against “discrediting the armed forces.”

Gennady Zyuganov, the head of Russia’s second-largest political party, said his country was at “war” in Ukraine, becoming the highest-ranking politician to use that term for what the Kremlin calls a “special military operation.”

“For the past two months, the special operation in Ukraine and Donbas turned into a war,” Zyuganov said in comments to journalists in the State Duma that were posted on the Communist Party’s website. “Any war requires a response. Above all, it needs the maximum mobilization of forces and resources.”

Putin has so far refused to declare war, which would allow a general mobilization but could generate more popular opposition and would be a public acknowledgment of the military setbacks Russia has faced.

French President Emmanuel Macron spoke with Estonia’s Kaja Kallas and Lithuania’s Gitanas Nauseda about Ukraine’s military advances. Kallas, the Estonian prime minister, said in a reading of the phone call on Tuesday that the successes show that the Baltic countries and France have been on the right track in supporting Ukraine. He called for more help with weapons and said the European Union’s visa restrictions on Russian citizens have been effective in putting pressure on Moscow.

The three leaders discussed further military assistance to Ukraine, the situation at the Zaporizhzhia nuclear plant and possible steps for the EU to solve the problem of high energy prices, according to a statement from Nauseda’s office.

Energy giant Naftogaz Ukrainy may extract a million cubic meters per day or more of natural gas in the territories recaptured from Russia during the recent counter-offensive, CEO Yuriy Vitrenko said in an online briefing. This may effectively allow the company to return to pre-war production levels after it fell 2% this year following Russia’s invasion in February.

Russia shows no signs of looking for a way out, says Latvia (12:05 pm)

Russia shows no signs of wanting to end its invasion of Ukraine and lacks the troops and resources to win, meaning fighting should continue at its current level of intensity until spring, Latvia’s intelligence service said in a statement. report.

The West needs “strategic patience” to continue providing weapons, training and money to support Ukraine, the intelligence service said. The service assigned a low probability that Putin would be replaced and that Belarus would use its military to invade Ukraine. Russia is expected to use covert support for pro-Russian political groups in Western countries, cyber attacks and economic leverage to weaken solidarity with Ukraine.

European Union countries should impose tougher sanctions on Russia, Finland’s Prime Minister Sanna Marin told lawmakers in the European Parliament on Tuesday. The sanctions should affect the daily lives of ordinary Russians, as it is “not right” for Russian tourists to travel freely in Europe while the country’s soldiers kill civilians in Ukraine, Marin said.

Marin urged EU states to impose even stricter visa restrictions on Russians, saying suspending a visa facilitation deal “was not a sufficient decision.” The EU Council suspended the 2007 deal that made it easier to issue visas for Russian tourists, which means higher fees, the need for more documents, longer processing time and more restrictive rules for multiple-entry visas.

More than 70,000 square kilometers of territory in 10 Ukrainian regions are contaminated with mines and explosives, the General Staff of the Ukrainian Army said on Facebook. The Kharkiv region, most of which was recaptured by Ukrainian forces this month, is “extremely” affected, more so than Kyiv and Sumy, the Interfax news cable quoted Interior Minister Denys Monastyrsky as saying.

Kyiv has signed a memorandum of cooperation with the HALO Trust, which helps countries clear landmines after conflict, the Reintegration Ministry said on its website on Monday.

Ukrainian troops continue to advance after liberating more than 6,000 square kilometers in eastern and southern Ukraine this month, Zelenskiy said in a statement late Monday.

On Sunday and Monday, the Russian military “attacked Ukraine’s energy infrastructure” and “hundreds of thousands of Ukrainians found themselves in the dark, without electricity,” Zelenskiy said. This is “a sign of desperation by those who invented this war” and a reaction to the Russian defeat in the Kharkiv region, he said, adding that Russia is trying to cut off Ukraine’s potential to export electricity to Europe. Zelenskiy called for more sanctions and more pressure on Russia.

Zelenskiy to speak with IMF’s Georgieva on September 13: Reuters (8:35 am)

Keswick Creamery at Carrock Farms LLC of Newburg, PA is recalling several raw and pasteurized cheese products because all products manufactured by the company...
Read more