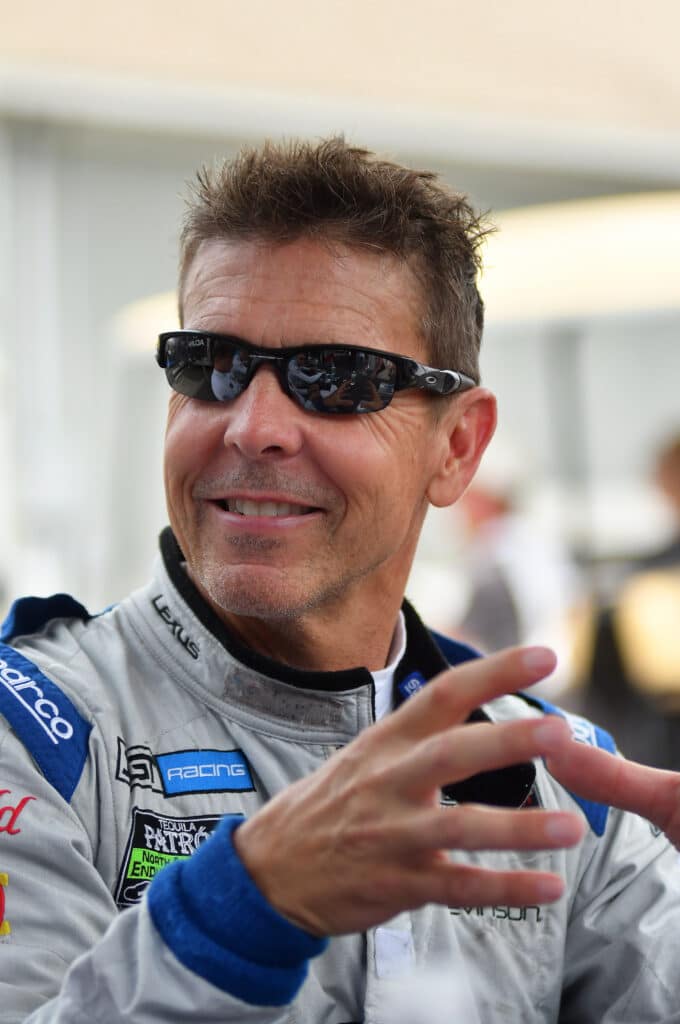 After five decades of racing, driver Scott Pruett is getting his adrenaline fix in a different way: working for Lexus. But he also has another research, which he has been pursuing since 2006. TheDresteBureau.com recently met this racing legend on a rainy Saturday at the Hilton Head Concours d’Elegance 2021.

TDB: How did you get involved with Lexus?

SP: Well, I’ve driven for almost every manufacturer over the years. Most of my career has been with Ford. More recently, I have done a lot of testing and development and raced with the current generation Ford GT, Factory BMW, Factory Jaguar, Nissan, Corvette, Factory Cadillac.

You know, it’s hard to retire, because I kept winning and being one of the fastest guys on the track. And so I thought that if I could make it to 50, that would be my senior year. And if I could get out on my terms, even better and both have happened.
So I stopped driving after 50 years, got inducted into the Hall of Fame and won more Rolexes than anyone else.

So I’m an ambassador for Lexus and an ambassador for Rolex. But I was incredibly worried about how I was going to keep my adrenaline rush. I’ve lived my life on adrenaline, living on the edge. And so, at the time, I purposely left Ford and went back to Lexus, where I was involved from 2003 to 2010. I love the brand. I love the guy at the top, Akio Toyoda. He is very passionate. He himself is a racing car driver. He is passionate about the brand and where it is going.

And then, being intimately involved in helping develop the new LC, convertible LC, and IS was that perfect way for me to stay and get my adrenaline fix. I house all of the Lexus driving schools and continue to give rides to Daytona and production Lexus at 170mph. So, it was a great transition for me.

TDB: Like a production car. What surprises you most about the LC?

SP: Well, when people look at LC, they have to remember that I have helped develop the current generation. I started testing with engineers five years ago, working on stroke control. And what people don’t realize is that the steering has to be programmed because it’s electric; the throttle is all fly-by-wire and so all that feeling has to be programmed. Then you look at things like stiffness. Take off the top, stiffness is a big deal. You look at the control of the race and all the years of racing.

We have been able to continually develop better technology for damper development, where it’s not about the springs, but the damper that is able to keep that rubber flat. Sebring is one of the absolute worst and most difficult tracks in the world, and if we could get around it by developing that shock package, that philosophy is something we will carry on. So, you have a good feel, a good firmness with the road, but also a very good ride quality. So, putting all of my racing years together to help develop new production cars has been great for me and great for Lexus.

TDB: Looking back on your career. Is there a race a moment that hits you for better or for worse?

SP: There are so many, you know, who realize I’ve been running 50 years. I started racing when I was eight, I retired in 2018. You know, I’ve won the Rolex 24 10 times in class, five times in total. He won Le Mans. He has won several times in IndyCar, sports cars, one of the most successful drivers ever in sports cars. And you know, winning at Le Mans is great. Winning at the Rolex 24, great; winning at Watkins Glen, Elkhart Lake, Surfers Paradise in Australia. So there isn’t a moment. I’m shocked where 50 years have gone by so fast. I look back, where have 50 years of racing gone? Ten years in IndyCar, a couple of years in NASCAR, the rest in sports cars.

And I think more than anything else, it’s having such a long career racing against all those great drivers, that old generation when I was just a kid: Bob Wallach, Hurley Haywood; Danny Sullivan, Mario Andretti, Al Unser Sr. Also on the side of the IROC, which was Invitational, you raced against Dale Sr., Waltrip and those big iconic NASCAR guys. And then to my IndyCar career towards the end, you have Scott Dixons, Castroneves and Tony Kanaan and then back to sports cars with Tom Christiansen and all of those – even Alonzo coming along. Everyone wants to be a part of the Rolex 24. So come and race against Formula One, IndyCar and NASCAR. So, for me, the most memorable are all these great riders I got to race with.

TDB: What to retire after 50 predetermined years in your mind?

SP: Was. One, I never thought I’d go that far. I mean, honestly, I drove for the factory Cadillac team in 2016 at Sebring and recorded the fastest lap of the race at 56. I was under contract with Chip Ganassi on a 1 year contract – for 14 years. We have won five championships and 40 races. So when you’re still winning and faster than your teammate who is 20 years younger than you, it’s hard to retire at that point. But I also knew that sport has given me so much. Yes, it took a long time. I broke a lot; it shattered my ankles, broke my knees, broke my back, shoulders, ribs and more concussions than I can remember. I mean, it was a tough race. But I loved every minute of it.

TDB: One of the things retired professional drivers say is that the difference between a young driver and an older driver is that as you get older, you think too much. Did you find it a challenge?

SP: I didn’t do it because I have always considered myself a student of this sport. Even in my last race; a sports student. I’m that guy who showed up first thing in the morning and was the last to walk out the door at the end of the day. In fact, Ganassi gave me a key to the trailer because I would beat the crew there in the morning. But I loved it. I tasted it. And I think the thing you can draw from is all those years of experience, but you still have to be quick. If you look at Formula 1, IndyCar, NASCAR and sports cars globally, there are perhaps 60 well-paid jobs. And globally, everyone wants your job. And so, it’s dog eat dog, it’s cutthroat, it’s really bad business. And I got paid 50 years for doing it. Well, maybe not at first. I turned pro when I was about 15-16 years old. But I’ve been paid for my entire career.

TDB: Was you involved in some Gazoo Racing effort for Le Mans or something?

SP: Not on the prototype side; At that point I was very involved with the Lexus. So only on one side Toyota on Indy cars and has been very successful.

TDB: So a change of subject; what is your daily driver?

SP: Well, I own a vineyard and winery, so I spend a lot of time in my Tacoma pickup. My car is a Lexus GS-F. It’s a 10th anniversary GS-F, so it’s a matte finish; a nice car. I love what Lexus does. We have a lot of great cars coming up and it’s fun to be part of the family.

TDB: Now, a lot of people would say, “Look, he’s working for Lexus. Sure, he likes the Lexus. “When you say” I like it, “what do you particularly like?

SP: Well, I had more contract options ahead of me when I retired due to all my successes over the years. I was in a very lucky position where it wasn’t the only option in town, I had more options. And so I chose Lexus, and it all started with Akio Toyoda for his passion for driving. And it’s not going anywhere. His name is on the facade of the building.

And so with that passion, he put the right people to do an amazing job. And one of those people is now the head of global Lexus, Koji Sato, a very dynamic guy and a close friend. His philosophy is very similar. They call it Driver Signature. Hence, Akio has a directive for all of his people. Our cars must be fun to drive, period. This is his general guideline for all his people. And it’s not about being the best, it’s not about the money. It’s about making cars that are fun to drive and do a great job, not just fun to drive.

You know, one of the things in Lexus racing that we have been frustrated with is that we say they are always too engineered. So we wanted something yesterday, and it wouldn’t come until a month from now because they wanted to work and work and work and work, so it was absolutely reliable, whatever piece or part they gave us. And it’s the same with their cars. I don’t know if anyone would say they have a more reliable car – if they have owned a Lexus – than a Lexus. And if they don’t, then a dealer is the first to help take care of them. And this is the truth. I’m not the only one trying to sell it. This is the reality of the brand.

TDB: You said earlier that you are now making wine. How did this start?

SP: So me grown up on a farm; my great grandfather was a farmer. My grandfather was a farmer. My father was a farmer. I love the whole element of working in the dirt, being outside. We are in Northern California, in the heart of the wine region, about an hour from Napa. Our area is a bit warmer, so we grow Syrah and I didn’t want to put my name on it. I wanted to make wine. So, we did all the soil research, all the climate research, and at the same time I had a mentor, a very good Napa Valley winemaker who then turned into my consultant. Lo and behold, our very first release, a Vintage 2010 released in 2012, Wine Spectator rated all three varieties at 93 points. The 2012 vintage was the most voted in the world with 96 points, 95 points, 94 points and we have been racing ever since.

TDB: What kind of volume do you do?

SP: Very small. We do 600 cases a year, which is a micro boutique. We are aimed at the consumer only, so we can keep the price low. We don’t make much money. I touch every bottle. It’s my passion to make great wine, drive great cars and wear great watches.

TDB: There are other race car drivers, as you said, who have licensed their name. Why not take the easy way out and do it?

SP: I love the passion of creating; the artisan side of creating small, intimate, top-of-the-range wines. And I’m not just saying it’s high-end, but having Wine Spectator backing us up with their ratings was absolutely fantastic. And you know, people used to say, “Well, you’re a Renaissance kid, you’ve gone from racing to wine and all these other things.” For me it’s just the passion of doing what I love to do. I love to drive racing cars. I love to drive and develop cars. And I love creating and producing wines.