Republicans and defenders of life victims of political violence since Biden called Trump supporters a “threat” to the US. 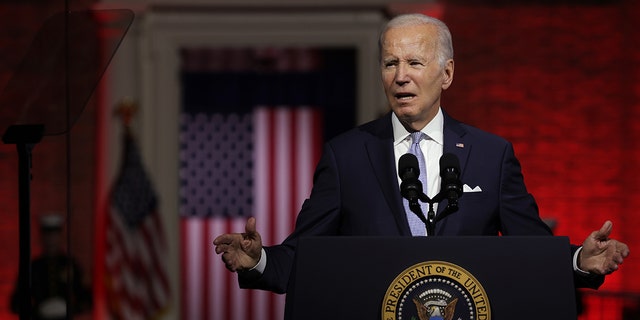 There have been several instances of political violence, many with victims supporting conservative causes, since President Biden warned of the alleged threat that supporters of former President Trump pose to the country, including attacks on anti-abortion activists and political activists and the murder of an 18-year-old in North Dakota.

“Donald Trump and the MAGA Republicans represent extremism that threatens the very foundation of our republic,” President Biden said during a September 1 speech in Philadelphia that drew widespread criticism from conservatives and even some left.

“They promote authoritarian leaders and fan the flames of political violence that are a threat to our personal rights, to the pursuit of justice, to the rule of law, to the very soul of this country,” Biden said of the supporters of the Agenda of the MAGA in his speech.

In the days leading up to the Philadelphia speech, Biden said MAGA Republicans “embrace political violence” and that “their whole philosophy” is “almost like semi-fascism.”

In the weeks after those comments, several instances of political violence occurred, including an elderly woman in her 80s who was shot in Michigan while campaigning in support of a right-to-life group last week.

Michigan State Police told Fox News Digital on Saturday that the elderly woman was shot after a “verbal altercation while handing out flyers.”

Another violent incident occurred last weekend in Texas when two volunteers were on the campaign trail for Republican Texas Governor Greg Abbott. reportedly assaulted while knocking on doors in a Houston suburb.

A suspect chased the two volunteers through a neighborhood in Humble, Texas, ripping off the side mirrors of the car they were in while trying to get them out of his vehicle.

“Political violence is never acceptable,” Mark Miner, a spokesman for Greg Abbott’s Texans, said in a statement Sunday. “With just over a month until election day, the passion to win must never become something more dangerous. There is no place for this in Texas.”

North Dakota man who ran over ‘Republican’ teen says he doesn’t want his own life and job in jeopardy
(Foster County Sheriff, Facebook)

Weeks later, a Democratic office in Seminole County was also vandalized with the word “Nazi.” written in graffiti.

In the past week, WJBK-TV reported that a pregnancy center in Oakland County, Michigan was vandalized with the message “‘If abortion isn’t safe, neither are you’,” marking the second time this year the building has been attacked by authorities investigating whether the leftist pro-abortion group Jane’s Revenge is linked to the crimes.

Earlier this month, 18-year-old Cayler Ellingson was killed when a 41-year-old man allegedly hit him with his vehicle and then told a 911 dispatcher that he believed Ellingson was part of a Republican “extremist” group that was persecuting him.

US President Joe Biden makes remarks on what he calls the “ongoing battle for the soul of the nation” in front of Independence Hall in Independence National Historical Park, Philadelphia, USA. , September 1, 2022. REUTERS/Jonathan Ernst
(Reuters)

“President Biden condemns these attacks and has made it clear that violence, threats of violence, and vandalism are absolutely unacceptable, regardless of who is committing such acts or why,” the House deputy press secretary told Fox News Digital. White, Andrew Bates.

Bates continued: “As he said in Philadelphia, ‘There is no place for political violence in America. Period. None. Ever.’ The president believes leaders of both parties should uphold that same principle, even when violence and threats are directed against women seeking medical care, members of law enforcement such as the Capitol Police and the FBI, or the former Vice President.”

The Conservatives have openly damned Biden in the wake of Ellingson’s death and suggested that his rhetoric in Philadelphia inflamed political division in the country.

“Words can have violent consequences,” said Kentucky Republican Rand Paul, who was the victims of political violence along with his wife outside of the Republican National Convention in 2020, Fox News Digital said in a statement last week. “President Biden needs to realize that his vilification of his opponents is inflaming some of his supporters to violence. As a victim of political violence, both sides must recognize the consequences of heated rhetoric.”

“Every chance they get, Joe Biden and the Democrats are splitting up, ducking blame and showing how radical they have become,” RNC spokeswoman Emma Vaughn told Fox News Digital. “With Biden as the chief divider, Americans are united in their concern about the Democrats’ tax hikes, soft agenda on crime, and price gouging caused by their reckless spending.”

Andrew Mark Miller is a writer at Fox News. Find him on Twitter @andymarkmiller and email tips to AndrewMark.Miller@Fox.com.

The Queen’s Six: From Anthems to Show Tunes

PSVR 1 games will not work immediately on PSVR 2

Why it matters: Sony's upcoming PSVR 2 has been widely hyped and hyped by many tech enthusiasts, promising outstanding features and...
Read more