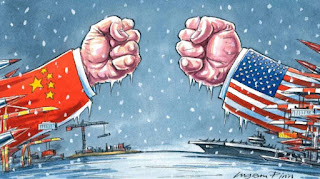 It may be that the US is trying to push China into action which would have a severely limiting effect on the progress China is making regarding its trade potential through innovations such as the Belt and Road Initiative, but of course it is not limited to. it.

The use made of Russia’s reunion with Crimea has provided the United States with a powerful tool with which to attack Russia and limit its trade potential through the sanctions still in place.

What if the current US actions were designed to push China far enough away to achieve such a Crimean effect on Taiwan? Almost any military action by the PLA would likely serve to churn out all the resolutions and calls for sanctions against China demanded by the US. Furthermore, and perhaps more importantly, it would provide the United States with what it would claim to be full justification for penalizing any nation that does business with China in the same way it has done previously with regard to Russia, Iran and Venezuela.

It may be that the Taiwanese authorities have been fully informed about this plan and have full knowledge of the required outcome. This result, in my view, would be to goad the Chinese to such an extent that a violation of the current rules by military means so that the above actions related to sanctions etc. they can be quickly applied to China just as they have been to Russia and Crimea.

At first glance, this US belligerence appears completely reckless and irresponsible, risking all-out war. However, if this policy is NOT the result of hotheads, but rather of cold and calculating, we may see calculated restraint arise once the PLA’s required military activity is consciously initiated by both the United States and Taiwan.

The US is more likely to be taking a phased approach in partnership with Taiwan and allies Australia and the UK. Attempting to undermine China by disrupting its currently rather favorable reputation in most of the nations it trades with seems to me far more likely than any kind of suicidal attempt to generate open and full-scale war with the nation. I say suicidal because there is no prospect that the United States, Australia, the United Kingdom and Taiwan can win against China in their own backyard. Human casualties in Taiwan and Australia and the devastation of infrastructure in both nations would be immense. Fostering a full-scale war with China would also end in ignominious defeat for the United States and the United Kingdom, as they would not have the ability to launch a serious challenge in the South China Sea.

In my view, it is far more likely that the US and its allies are simply pushing China to do something that allows it to be attacked financially and economically through sanctions and a full range of American-led prohibitions on countries attempting to doing business with a China that has so far intentionally pushed into a pariah state.