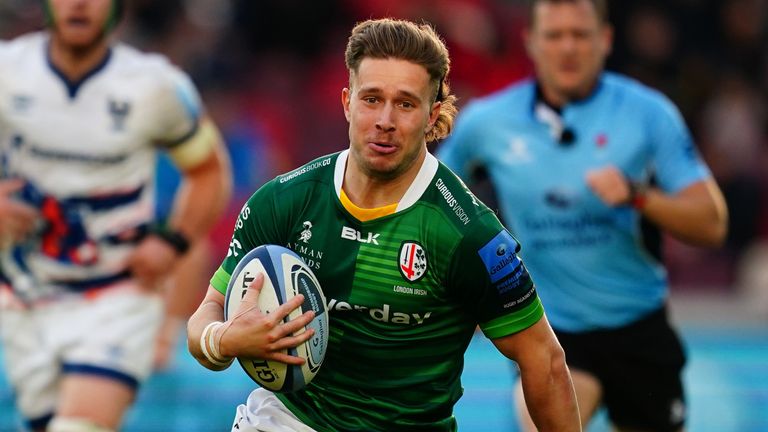 The Newcastle Falcons claimed their first win at the Exeter Chiefs, while the London Irish reacted to equalize with the Saracens; Bristol Bears and Sale Sharks also won on Saturday

Toby Fricker scored two tries as Bristol ensured Worcester extended his miserable away record as he crashed into a defeat at Ashton Gate.

The Warriors have not won away games in any competition since they beat London Irish at Stoop in September 2020, but if they had taken their chances, they could certainly have brought the home team a lot closer.

Despite having the lion’s share in terms of possession and territory, the Warriors were only able to handle a single Noah Heward try while the mighty Bristol scored four to seal the bonus point.

A hat-trick from Kyle Rowe set the stage for the London Irish 14 men to snatch a sensational 34-34 draw against the Saracens at StoneX Stadium.

The Exiles were down 34-8 with 18 minutes left, having lost Adam Coleman to a red card in the first half, but somehow returned to earn a draw, with Rory Jennings kicking the final conversion to seal the comeback. .

Tom Wolstencroft’s try had put the Saracens ahead, followed by Paddy Jackson and Alex Lozowski exchanging penalties before Coleman was sent off for a high tackle.

There seemed to be no way back for the Exiles, but Rowe crossed again and this was followed by scores from Nick Phipps and Matth Rogerson, who created a grandstand finish that saw the winger complete his hat-trick and Jennings earned her team a share of the loot.

Northampton enjoyed a lot of territory and possession but were pushed back by a determined defense from Sale, who refused to provide any gaps for the visiting team to exploit.

The Saints – 23 players absent due to injury and international engagement – ended the evening with just two James Grayson penalties to show their efforts.

Northampton also suffered a triple hit before kick-off as Fraser Dingwall, Teimana Harrison and Juarno Augustus were forced to retire from the squad due to injury.

Newcastle scored their first win in Exeter on the 14th try when Brett Connon’s penalty stunned the Chiefs.

It was the third defeat in four home games for the Devon team, following defeats to Northampton and London Irish.

George McGuigan’s throw-in try and Joel Hodgson’s transformation gave the Falcons the lead, but Joe Simmonds – who played as a full-back – equalized Exeter on the stroke of half-time with a try that also transformed.

Don Armand made his way for a converted try for the Chiefs in the 10th minute to take them ahead, but Jack Nowell’s yellow card for an intentional knock-on left them temporarily at 14 men.

An unconverted try by Ben Stevenson following a driving maul gave Newcastle hope, and although Hodgson missed both the conversion and a penalty, Connon stepped forward to snatch the win when the Chiefs breached the 45 meters out. with eight minutes left.