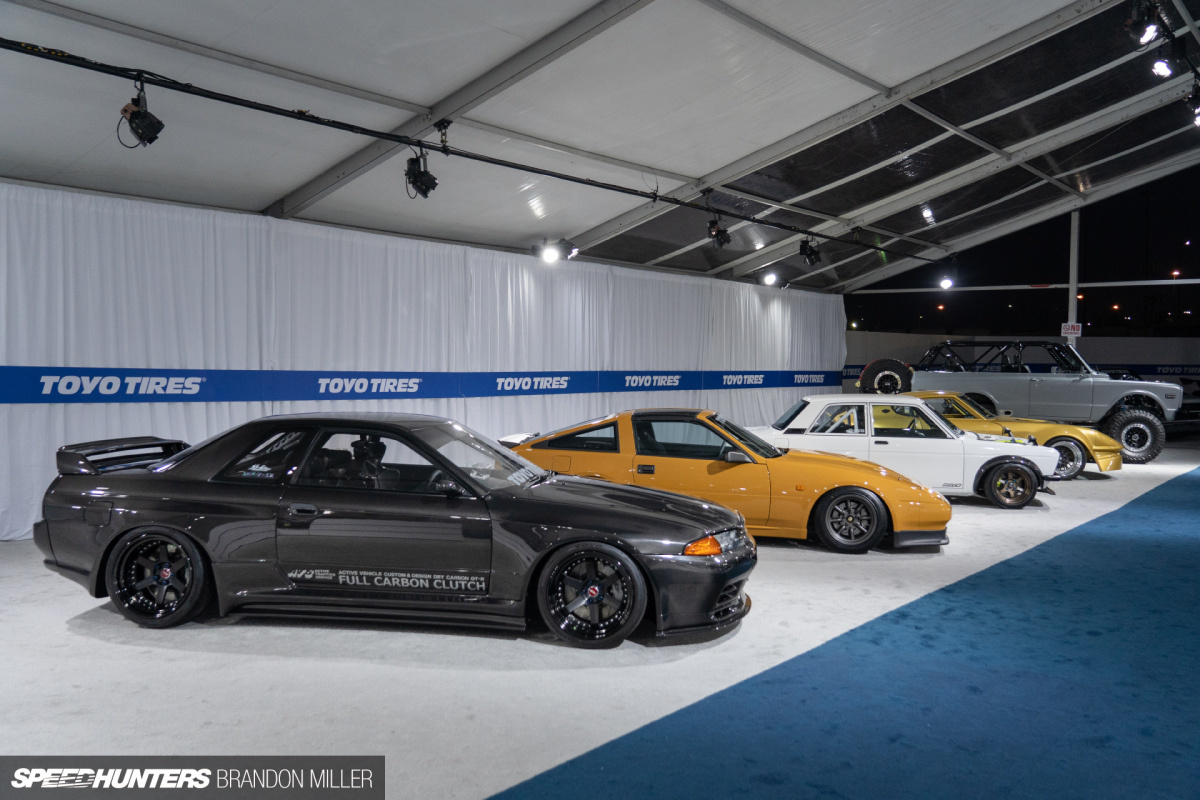 In recent years, the Toyo Treadpass has been one of the most anticipated elements of the SEMA Show. It is not even difficult to understand why; the vehicles – making their public debut as new or reinvented – are unique, varied and always spectacular.

A few months ago no one even knew if the SEMA Show would go on into 2021, but regardless, this year’s 32-car Treadpass display didn’t disappoint.

For me personally, the show was even more special.

Not only was this my first trip to Las Vegas for SEMA, my personal Nissan Z31 project did the Toyo Treadpass cut, which was a real honor. A huge effort was made to complete the build before it was shipped to Las Vegas, and I will be sharing this story with you in the coming weeks. What I can say is that all the time, stress and financial investments were worth it; I will never forget this experience.

Perhaps the most memorable aspect is the people I’ve met over the course of this week. The Treadpass machines are all great, but interacting with the people behind them and hearing their stories made the event for me.

Of course, Speedhunters will take a closer look at some of these builds in the near future, but for now I want to share some of my personal favorites with you.

Where do we start? Well, seeing as this carbon coated Nissan Skyline GT-R R32 was mentioned in a previous SEMA preview, let’s jump in here.

Jaw lifted firmly off the ground, how amazing does it look? The Japanese Garage Active team has already appeared on Speedhunters, but this is a completely new build specifically for SEMA and one of the best so far.

With their full “dry carbon” wide-body kit, Garage Active has once again stuck with the RB26 engine, albeit increasing the displacement to 2.8 liters and screwing in a gigantic Garrett turbo good for 800+ horsepower on the side.

An OS Giken OS88 6-speed sequential gearbox sends the power to all four wheels, and as you’d expect given the amount of carbon used, the weight has also been reduced by a couple of hundred pounds. While having a complete interior.

Given the values ​​of these GT-Rs now, it’s great to see such a large build still put together by the Garage Active team. More of this please.

Yes, it’s a wide-body, twin-turbo, LS-powered DMC DeLorean. If there is a car that you never imagined seeing at the SEMA Show, or anywhere else in the world, it is definitely that one.

Owned by manufacturer Tim Moceri, the initial concept of the custom DMC-12 came from Speedhunters friend Khyzyl Saleem, before being built by Tim and the Salvage To Salvage team.

Sitting on custom KW coilovers, the rear view with the turbos dangling is something else. And with that kind of power behind it, 88mph should come and go in seconds …

When Lexus built the GS300, I don’t think they ever planned it to do any form of racing. But take a look at the 507 Garage build and tell me it doesn’t look ready to decimate everything.

Digital guru Jonsibal is responsible for the initial rendering and with the help of Shawn and the Attacking The Clock Racing team this monstrous GS300 was born. It’s easily one of my standout builds here; attention to detail and attention to speed are second to none.

I can’t wait to see (and hear) this thing used in anger. We will need to do a proper story on this soon.

Another build from the guys at Salvage To Salvage, this time a Chevy C10 truck randomly loading a full Tesla powertrain.

EV could be something that we will all succumb to in the future, and whatever your thoughts on that are, the fact that you can still incorporate this level of creativity – even without a proper engine – is something I can definitely accept.

But if EV isn’t your thing, there’s always Ruffian Cars. Before someone screams, “Not an original GT40 torn apart”, know it’s not exactly a car kit either.

Starting as the Superformance Mark 1 GT40, the Ruffian Cars got wider, lower and added even more power to the mix for one of the ugliest builds at this year’s SEMA.

Take a look at the rear tire – they’ve somehow squeezed the 19 × 14-inch wheels under the arches. Do you want to have a guess about the offset? Negative 102. This is not a typo either.

You can see more of the construction on the Ruffian Cars website here.

Who else still has a huge soft spot for any rotary engine car? Jonny Grunwald’s Mazda RX-7 FD3S makes you want to climb Craigslist immediately and buy something that packs a spinning dorito. Because under that hood is a three-rotor 20B from Lucky 7 Racing and the TCP Magic airplane makes it look like it’s just stepped out of a time attack.

But it’s still a road car, even with over 1,000hp available from the 20B and the giant Garrett G42 turbocharger combination. This thing has to be an absolute roller coaster to ride, and the noise? We need videos.

If you’ve ever been to SEMA, you’ll know that the Treadpass has quickly become one of the go-to hero builds. 2021 is no different; Stan Chen and the Toyo team have once again made a splash with their selection of cars.

To be sure, the spotlights above are just a small overview of the full set of cars on display, so we’ll be shooting that back very soon with a Part 2. If you thought the cars above were wild, wait until you see the six-wheeled G-Wagen and a BMW 8 Series with pandems.

Stories related to SEMA on Speedhunters