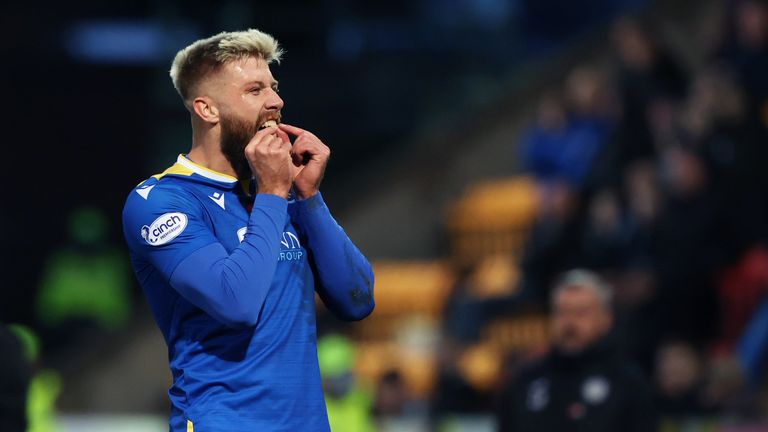 The guests were in the lead for much of the game but created little to worry Zander Clark in the home goal, while the Perth side’s best chance came in the first minute with Glenn Middleton having his shot saved.

St Johnstone finished the game with 10 men after Chris Kane was sent off for a second yellow card.

Callum Davidson made a change from the team that defeated Dundee United last weekend. Cammy MacPherson retired against his parents’ club, with Murray Davidson stepping in.

It was the home team that had the first chance after 10 seconds, Middleton taking advantage of a St Mirren mistake to fire in a shot that Jak Alnwick saved.

The guests responded with a header from Curtis Main which was saved by Clark before the striker saw his turn shot fly just over the far post.

That first burst of action, however, soon gave way to a turgid battle in midfield that saw both sides struggle to create anything in terms of meaningful chances.

It took until the 35th minute to get another chance, but Craig Bryson cut well to the side.

McGrath was looking for the player most likely to create something for the visitors. And from his perfect pass, Clark made a decent save to push Main’s low shot into a corner that Conor McCarthy turned head to side.

McGrath then had a shot blocked by Jamie McCart as St Mirren sought the breakthrough before half-time.

St Johnstone made two halftime changes to try and freshen things up, with Stevie May and Shaun Rooney for Middleton and Michael O’Halloran.

But it was the guests who started from the front foot with a speculative volley from McGrath that went well on the side.

There was a moment of controversy just before the hour when Liam Gordon took down Main as he ran for goal. Referee Greg Aitken showed the defender the yellow card, but it could easily have been a red. Scott Tanser rolled the resulting free kick over the crossbar.

St Mirren were in the lead and Joe Shaughnessy’s header from Tanser’s cross was blocked for a corner which did nothing.

The home team played the final five minutes with 10 men after Kane was shown a second yellow card for dissent.

St Johnstone’s next match arrives in the League Cup, away to Celtic after the national team break on Saturday 20 November; start at 5.15pm.

St Mirren hosts Livingston in the Scottish Premiership on the same afternoon; start at 15:00.