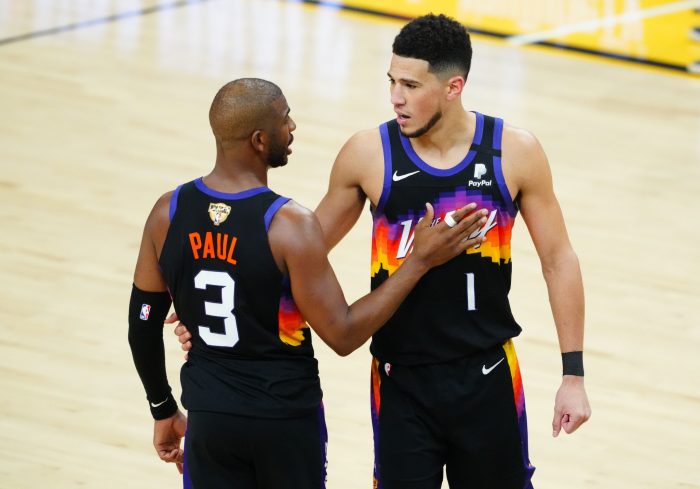 The Phoneix Suns erupted in the third quarter on their way to defeating the Milwaukee Bucks 118-105 on Tuesday night in Game 1 of the 2021 NBA Finals at Phoenix Suns Arena.

At the end of the third period, the Suns trio Chris paul, Devin Booker and Deandre Ayton had already combined for 67 points, 27, 22 and 18 respectively.

“I saw the shots they were taking at me and I started taking them,” the 17-year-old vet said in a post-game interview. “It’s just a game, we have to stay locked up. We have one, we have to get another.”

The lead extended to 20 points 88-66, and Suns point guard Chris Paul, who finished the game with 32 points and nine assists, anchored the third-quarter rush by scoring 16 points.

The Bucks began to show life in the fourth quarter to cut the lead to 7 points after a 7-foot jump from Jrue Holiday, a layup from Kris Middleton, a triple from Byran Forbes and a second-chance layup from Giannis Antetokounmpo. That brought the score to 101-94 with 7:16 left.

Pheonix calmed the storm with a three-point Booker, and the Suns took control of the rest of the game. Booker finished with 27 points and six assists, and Ayton had 22 points and 19 rebounds.

Middleton led the Bucks with 29 points and seven rebounds, and Antetokounmpo added 20 points and 17 rebounds.

The two teams traded buckets for the most part in the first quarter, but the Suns did enough to maintain a 4-point 30-26 lead.

The Suns doubled their lead in the second quarter by entering the half with an 8-point lead 57-49, but the Bucks had no response for the Suns in the third.

Midway through the quarter, the Suns took off and doubled their point total. They led by 16 at 4:41 to go in the third quarter and closed with the fourth ahead by 17.