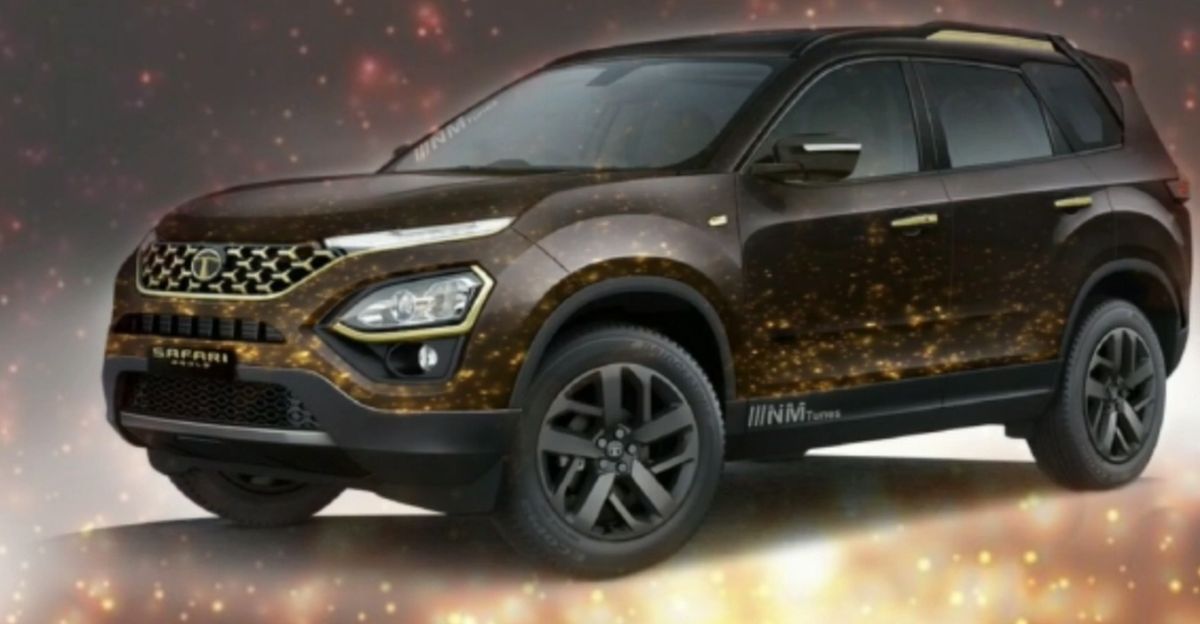 Tata Safari is one of the famous 7 seater SUVs on the market. It is based on Tata Harrier and was launched on the market earlier this year. Tata Safari competes with cars like the Mahindra XUV700, Hyundai Alcazar and MG Hector Plus in the segment. Tata recently launched the Gold Edition of the Safari SUV before IPL 2021 and these versions had more features than the regular versions. Here we have a video showing what Safari would look like if Tata launched a Celebration Edition of the 7-seater SUV on the market.

The video was uploaded by NM songs on their YouTube channel. The artist chose the recently launched Gold Edition for the Celebration Edition. The Tata Safari in Black Gold hue looks extremely good. Gold accents on the SUV’s front grille, headlights and door handles give it a premium look. To convert the Gold Edition to the Celebration Edition, the render artist simply added gold sparkles as a pattern on the black painted area.

The Celebration Edition is basically a Diwali themed version of Tata Safari. The SUV will come with all the other features offered by a regular Safari or Gold Edition. The golden sparkle effect on the paintwork looks neat and the black paint of the SUV also takes on a slight red tinge. It should be noted that Tata has no plans to launch such an edition on the market and the one seen here is just a product of the artist’s imagination.

Tata Safari is a Harrier-based 7-seater SUV which is a 5-seater SUV from Tata. The brand new Safari is named after the iconic SUV that was discontinued from the market years ago. The car comes in 6 and 7 seater configurations. The Gold Edition of the safari offered features such as the wireless phone charger, the upgraded touchscreen system which now supports Apple CarPlay wireless and Android Auto, seats upholstered in genuine leather and ventilation function for both first and second row passengers. This is a unique feature as no other car in the segment offers ventilated second row seats.

Regular Safari also offers some of these features. In addition to this, Tata offers an IRVM with automatic dimming, electrically adjustable driver’s seat, two-tone or carbon black 18-inch alloy wheels (depending on version), panoramic sunroof and many other features. Both Tata Safari and Harrier have a similar design. Safari is slightly taller and it is also slightly longer. The step however remains the same. This was done to accommodate the third row of seats.

The car is powered by the same engine as the Tata Harrier. The same engine is also used on Jeep Compass and MG Hector and Hector Plus. It is a 2.0 liter turbo diesel engine of Fiat origin that generates 170 Ps and 350 Nm of maximum torque. The engine is available with 6-speed manual transmission and 6-speed automatic transmission. The price for Tata Safari starts at Rs 14.99 lakh, former showroom and goes up to Rs 23.17 lakh, former showroom.