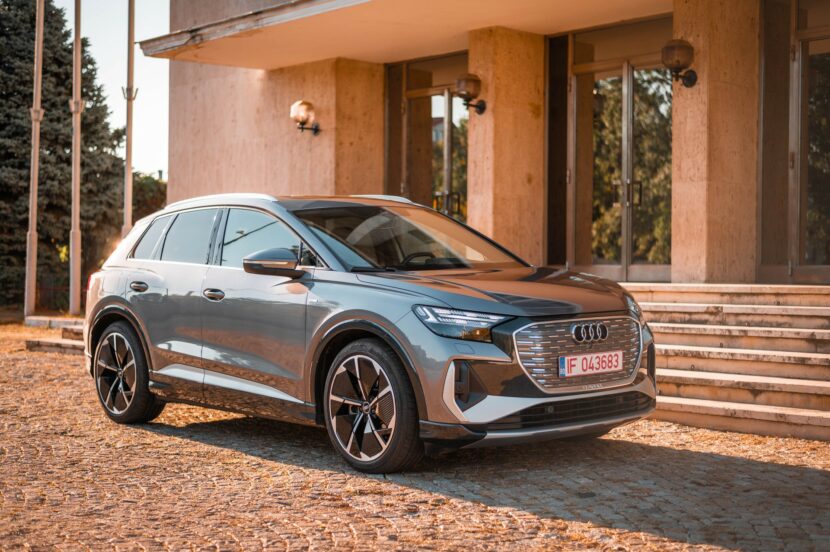 The automotive industry is changing at a faster rate than ever these days and every car manufacturer has to adapt to the needs or requirements of their customers. Of course, some automakers continue to mix both internal combustion engines and electric cars on the same platform, while others have decided that a dedicated EV platform is the right move forward. Currently, this seems to be the dominant idea in the industry. It is in these moments that Ingolstadt’s highchair executives are more than happy to be part of the VAG group.

Built on the MEB platform

This is because the Volskwagen group has invested no less than $ 48 billion in its MEB modular electric platform. Architecture is the basis for almost all electric cars that come out of Audi, Skoda, Seat, Volkswagen. And some Porsche products will also use the platform in the future.

Audi, of course, is taking full advantage of this dedicated and shared platform. The Q4 e-tron is built on the MEB platform and arrives on the market as an alternative in a still growing segment. While it might seem late for the party, the Q4 e-tron marks a couple of very interesting premieres.

For example, in the low specification versions, it becomes the first Audi rear-wheel drive car to sell volumes ever to arrive in showrooms. A rear-wheel drive Audi? Yes, that’s one of the many benefits these modular platforms offer these days. You are no longer forced to adopt a certain positioning for the motor or motor axis. Of course, there was also the Audi R8, but that was only offered as a rear-wheel drive model in special versions and as never offered as standard in that configuration.

In the case of the Audi Q4 e-tron, the front is still dominated by the singleframe “grille”. The only difference compared to other Audi models is that the single chassis on this car is completely locked to improve the aerodynamics of the car. Our model was also equipped with the S-Line package which brought forward some fake sockets on the sides.

Another design element specific to electric vehicles is the short hood. A long hood is no longer required to house a huge V12 under it, so car makers are expanding the interiors of these cars as the platform below allows for it. That way, the hoods are now small by comparison and it shows when looking at the Q4 from the side. Its profile looks a bit bulky but it’s all done with a clear purpose: to make an efficient and spacious car. 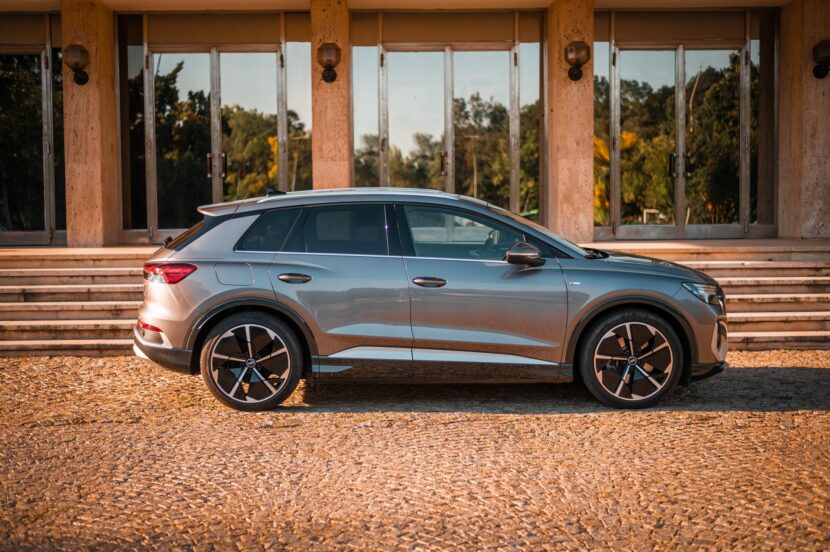 Up front you will also notice the new headlights, also a world first. On the Q4 e-tron you can adjust the design of the daytime running lights using the onboard infotainment system. You can choose between four different designs and it’s a really cool trick. After all, Audi knows a lot about design and lighting, so why shouldn’t it draw on that knowledge to have an edge over the competition? 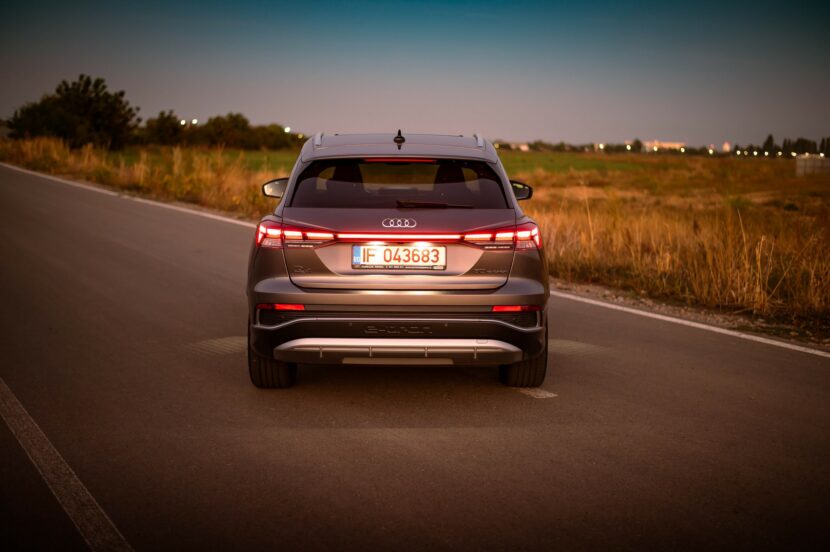 The rear end also features clean-cut surfaces and a rather one-piece design. The lights dance a little every time you lock and unlock the car and they look really cool as you watch it. An interesting detail I noticed on the back was that the quattro badge was missing, even though our particular tester was an all-wheel drive model. Instead, there’s a huge e-tron badge marked in the rear bumper that you can’t miss. 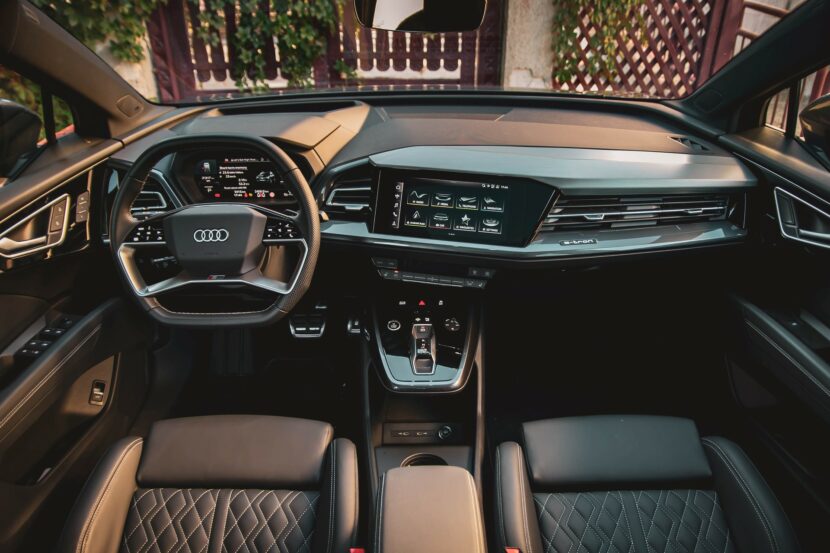 Everything as usual inside the cockpit of the Audi Q4 e-tron. There are some caveats. The overall design looks familiar in every way, with one exception: the center console. On the Q4 you have a floating center console at the bottom of the dashboard where you’ll find the gear selector and a few other controls, all sitting in the middle of a sea of ​​piano black. Right above it you’ll find a simple HVAC panel, with old-fashioned buttons (thank God!). Going higher, you will find a 10.1 ”display which is optional and features the familiar MMI interface. On the Q4 you can use Android Auto and Apple CarPlay wirelessly. 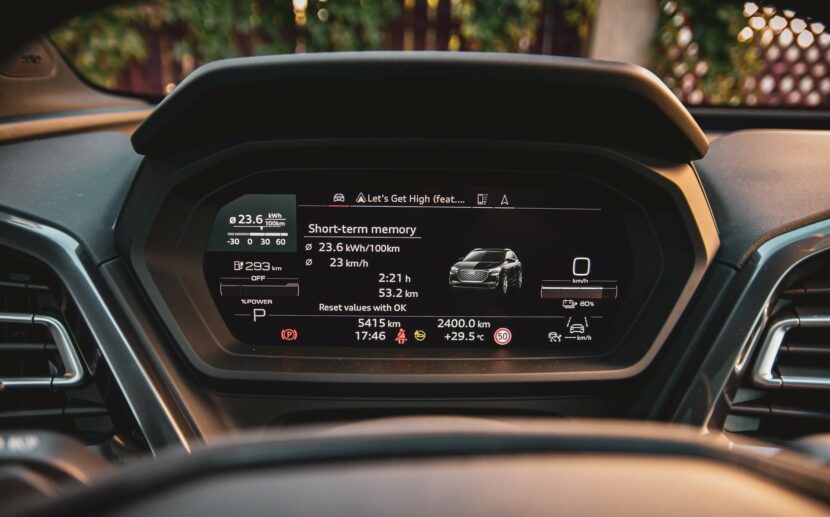 The instrument cluster is, of course, the Audi Virtual Cockpit we have become accustomed to by now, with very few changes compared to what you will find on other Audi models. Most of the differences will be related to the units used (this being an electric car) and to the display of the state of charge of the battery. There is no tachometer, just a power gauge.

Then there is the steering wheel. With a flat top and flat bottom, it no longer looks like a “wheel” but is closer to the hex shape. However, this does not detract from any functionality, as do other new proposals in the sector. It looks great and works great, being on the thinner side of things but wrapped in perforated leather. 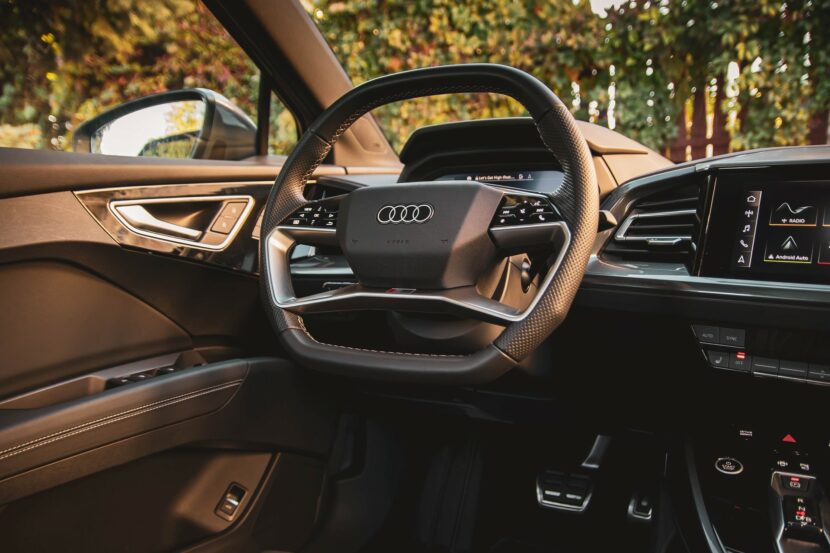 One problem I had with the steering wheel was the introduction of touch sensitive buttons. It’s something we’ve also seen on other MEB products, such as the VW iD.4 or the iD.3 and I haven’t been a fan of this approach since seeing it on the Mercedes-Benz E-Class. The buttons are difficult to use just by touching them as the inputs are rarely accurate. Also, you end up accidentally touching them and activating all kinds of functions. Not once have I ended up calling someone by accident because of those annoying touch-sensitive surfaces.

Another problem I noticed was the quality of the plastics in some places. The dashboard and the top of the door panels are covered in soft-touch plastic which is decent for the price range. Our car also wore an optional package that transformed the seats into comfortable armchairs, wrapped in nappa leather, with quilted stitching. However, the underside of the door panels and the entire rear door panels could have used a little more quality. 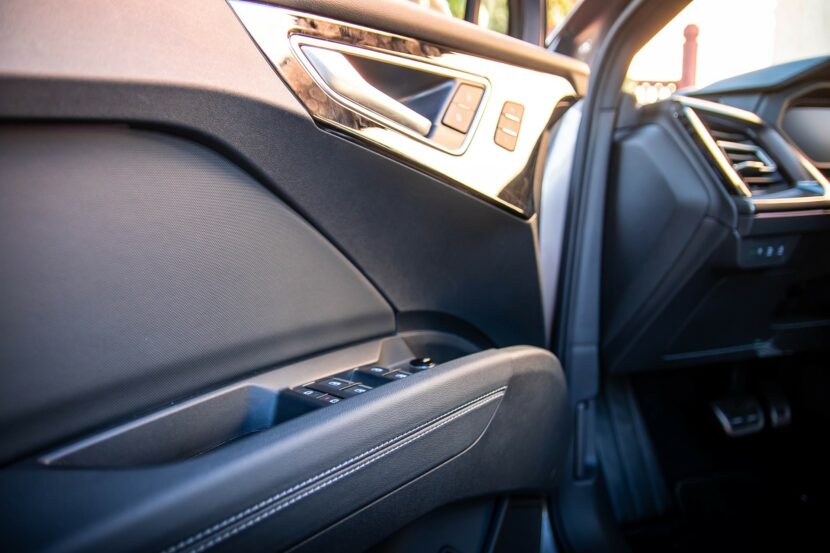 Even so, you can get distracted by the huge optional panoramic sunroof that brings a certain feeling of space to the interior. And there is also a lot of space. The MEB platform allows engineers to position electric motors towards the ends of the car. In this way, the internal space is greatly amplified since there is no transmission tunnel. 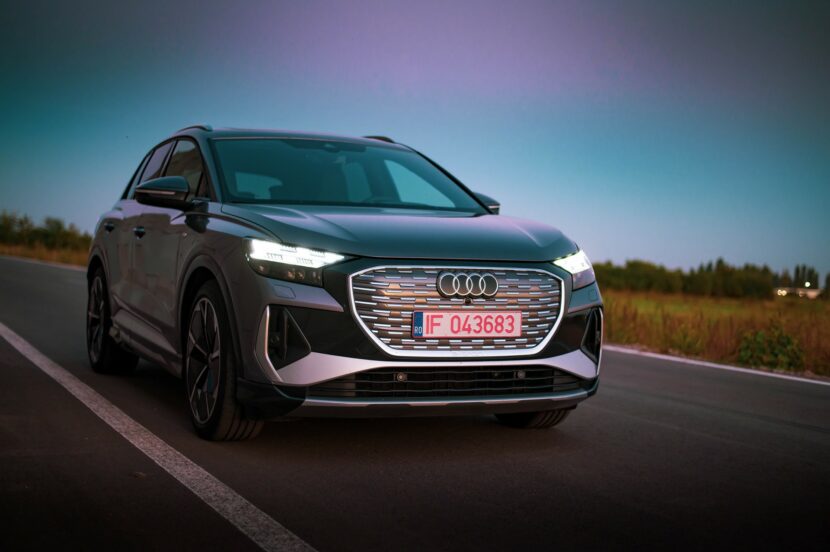 The Audi Q4 e-tron 50 quattro is the most powerful and fastest e-tron Q4 you can buy today. It uses two electric motors, one for each axle, which together can deliver up to 299hp and 460Nm of torque. Mind you, most of the time the car will run in rear wheel drive mode, which means that only the rear axle motor will be used, in order to save energy in the process. Switch to Dynamic mode and both engines kick in for the best possible performance.

Hidden inside the floor you will find a huge battery available in two versions. The entry level is rated at 52 kWh of usable capacity and the larger one has a total usable capacity of 76.6 kWh. The latter was what we had for testing purposes and turned out to be enough for most scenarios.

In the city, the average energy consumption recorded was 18.1 kWh / 100 km traveled, which means that, if you count, you can travel up to 423 kilometers on a single charge. Outside the city limits, on the motorway, at an average speed of 130 km / h that energy consumption has risen to 24 kWh / 100 km, adding up a range of about 320 km. 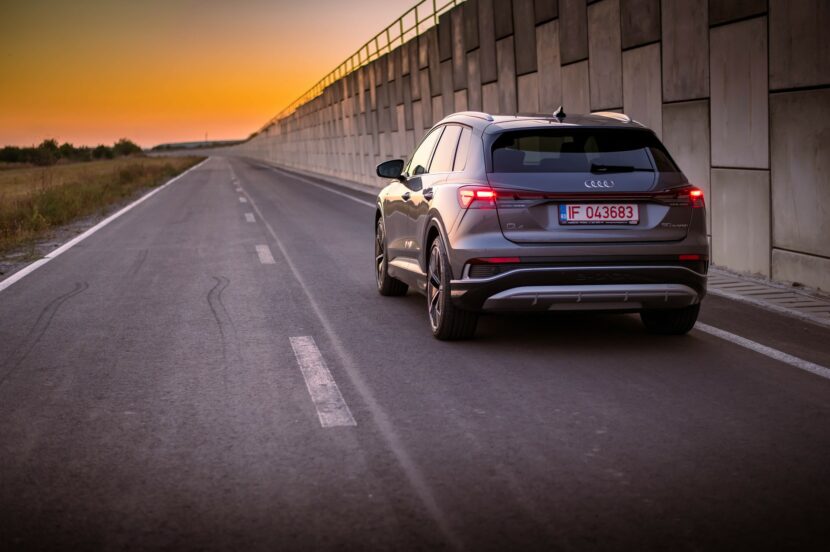 On a series of b-roads, with an average speed of 73 km / h, the Q4 showed a consumption of 15.6 kWh / 100 km, adding up a total potential range of 491 km. Mind you, all of these results were achieved without reducing the comfort creatures and without using eco mode or anything like that. The car was always in Comfort mode and the air conditioning worked, because the outside temperature was, on average, 20 degrees Celsius.

Another important question potential electric vehicle users may have is about charging time, which is known to be a bit of an Achilles’ heel. All Q4 models are equipped with 125 kW charging capacity, sufficient for most situations. If you find a charger that can deliver that much power, you should be able to charge your car 10 to 80% in about 40 minutes, which is more than decent.

Testing the charging capabilities, I only found a 75kW charger nearby that managed to deliver around 37 kW hours of power to the battery in around 28 minutes. Think of it this way: with 37 kWh you could drive almost 200 km in the city or another 150 km on the highway.

As to how those miles would be covered, it would depend on a number of factors. Our tester was equipped with the S-Line package, sports suspension, sports steering and a number of other add-ons that were supposed to improve the car’s behavior when driven in a sporty way. However, we didn’t have adaptive suspension, which could have made things even better. 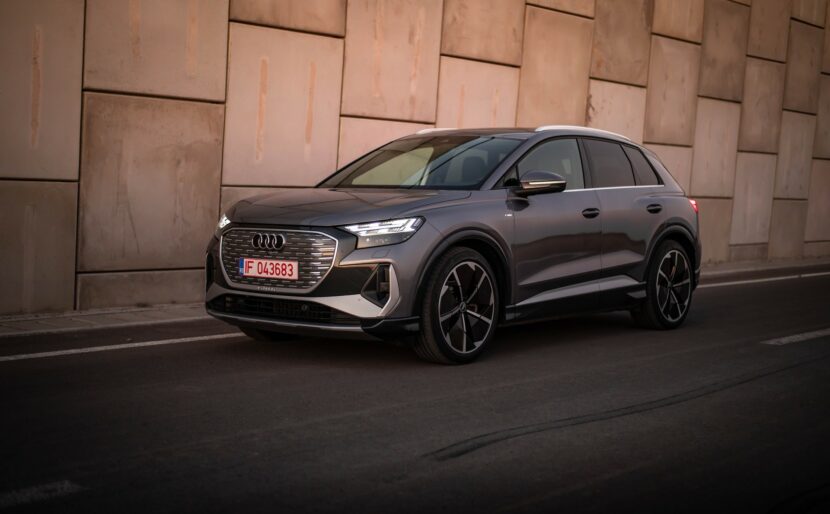 Either way, the Q4 e-tron 50 Quattro performed a lot like an Audi, albeit rear-wheel drive. The suspension was incredibly comfortable in almost any situation, with barely noticeable small bumps. Not even the largest potholes sent many jolts or a big thud in the cabin, despite driving on 21 “wheels. The atmosphere was serene inside the Q4 most of the time.

Switch to dynamic mode and the first thing you will notice is the sound. The Q4 e-tron emits a special sound through its speakers that gets louder with speed, as a way to offer feedback to the man behind the wheel. It’s hard to describe, but it resembles the sonic spaceships used to make in science fiction movies.

It helps you keep that speed in check because, despite its heavy weight, the Q4 e-tron can build up speed at a rapid pace. And since we had double glazing on our car, there is little noise to tell you how fast you are going, at least in a straight line.

Arriving on a series of winding roads, if you try to maintain speed in the corners, you will immediately receive audio feedback from the tires. The grip is decent but the 2.3 ton car is still heavy and the laws of physics still apply. You will feel the underpinnings of the car pushing out of the curve even though there isn’t much slope to speak of overall. 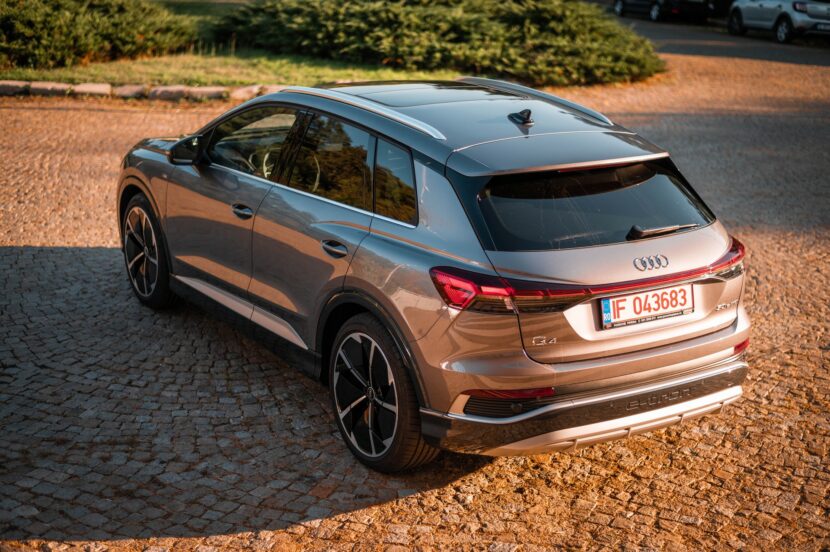 Despite its 299 horsepower, I got the feeling that the Q4 e-tron 50 wasn’t designed for carving canyon roads. Instead, Audi’s new electric SUV was created to offer an alternative to rivals on the market today. This means that the Audi Q4 e-tron will most likely be used in the city for shopping and school rides. For these purposes, considering the range we have obtained from it, the Q4 e-tron will be perfect. Ask for it to be a sports car (which it definitely isn’t) and it won’t be up to par.

Keep your expectations in check and you won’t be disappointed.