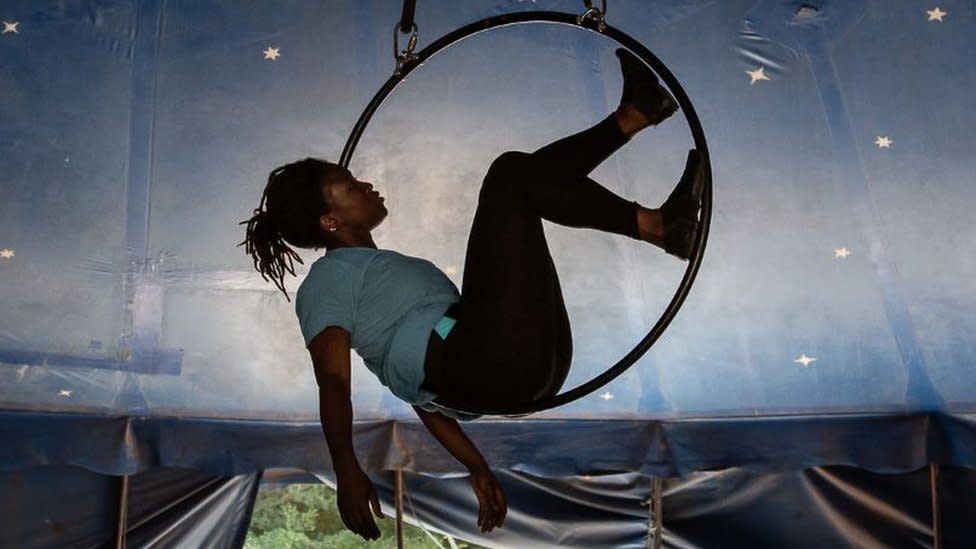 Senegal’s only circus company, Sencirk, was founded by former child beggar Modou Touré, who now wants to help others in a similar position, as Annika Hammerschlag from Dakar reports.

Mr. Touré was sent to a Koranic school at the age of seven, where he was mistreated for learning the Islamic holy book too slowly.

He fled to Senegal’s capital, Dakar, where he lived on the street for years before finding refuge in a shelter. One day, two Swedish circus performers came to teach children acrobatics and Mr.Touré (below) fell in love.

He trained in Sweden for three months and toured with professional circus companies around the world, before setting up the Sencirk tent in Dakar.

“The circus is my therapy,” says Mr Touré, who is now 31 years old.

It helped him overcome his trauma and difficulties in making eye contact and being touched.

The practice also helps him control his emotions and has the ability to help others like him, he says.

“He gives them confidence and helps them fight their demons.”

Every year, thousands of young Senegalese children are sent to the cities to study the Koran, only to find themselves forced to beg for money and food on the streets.

If they fail to meet their teachers’ daily quota, or commit other minor offenses, they are often beaten and chained.

Some of them run away and like Monsieur Touré they find help in a network of shelters.

One of the young circus practitioners – not pictured here to protect his privacy – has a similar story to Mr. Touré, having escaped from the Koranic school after he remembers being held and whipped every time he recited the Koran incorrectly.

The fourteen-year-old says he loves everything about the circus: “It helps me learn and makes me aware.”

If she ever gets home, she plans to teach circus to the kids in her neighborhood.

He hopes to join Sencirk as a full-time artist someday.

“Show them they can go off the streets to earn a living in the circus,” says Touré.

Whether out of necessity or a desire to preserve what they call the “Africanity” of their shows, Sencirk uses locally found materials to make his equipment, such as trapezes, safety mats and juggling balls.

Sencirk’s unique approach to the circus is to share personal stories that other West Africans can relate to.

A performance portrays the attractions and dangers of illegal migration to Europe.

Another shares the experience of living as a Talibé on the run.

It is a community built on resilience: a group of people working through shared trauma who are strengthened by their ability to overcome it together.

All images are subject to copyright