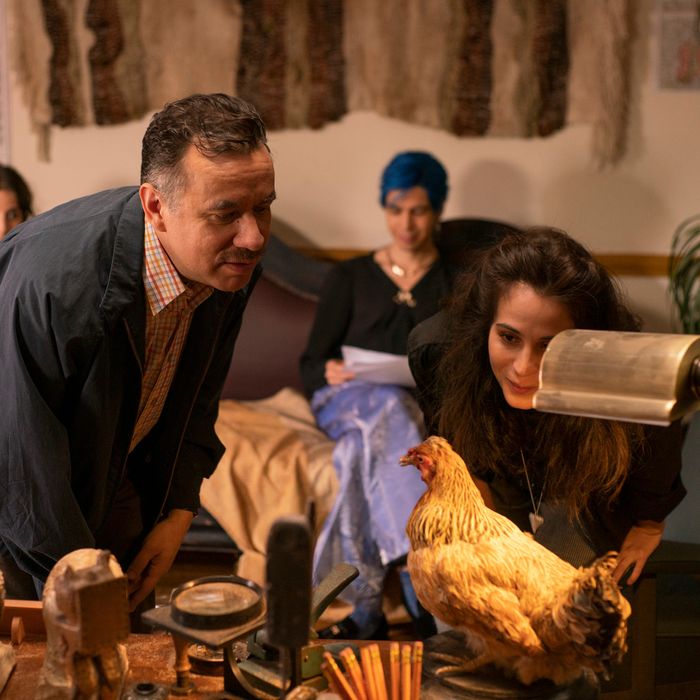 Clothes don’t make the Spooky. While it’s cute that Tico tries so hard to fit in with his nephew’s outfit, he doesn’t need to wear a black mesh top and wide-legged shorts to live the life of horror. His suggestion that a little face-to-face time with Nuestra Belleza Latina’s dissected skeleton might cure Renaldo’s ghost problem is more than enough. (I’d think digging up the corpse of the woman who’s stalking you would only make the stalking worse, unless of course you solve her murder afterwards. That tends to shut up the ghosts.)

Of course, Andrés, the most fashionable of the Espookys, would not agree with this statement. Obviously, he feels a bit moved by Professor Robert Roberts’s presumptuous but partly semi-correct observation about dangling earrings, which mean “nothing and everything,” according to a 2019 article on the cut that mentions Julio Torres and the spookys by name. But buying leather pants, a hobby for which he has no justification, unlike music boxes, is important enough to him that he takes a job, albeit a brief one, modeling stairs. And how is one supposed to sell disembodied steps without a step headpiece and a sequin-patterned high-necked cape, hmm?

To get the whole grad school on it, this season of the spookys comes following a very interesting thread about the presentation (both gender and otherwise) and the construction of reality through images. Take the ongoing thread about those (fictional) sexy lady signs that President De La Guarda has been posting around town: Both Tati and Mayor Teresa Lobos respond to Ursula’s discomfort with the figures with casually misogynistic comments, which suggests that this campaign is doing exactly what it is meant to do to reinforce casual sexism and create an atmosphere in which women’s second-class citizenship is a given. Ursula also faces the classic feminist dilemma of choosing between an imperfect vessel for her political ideals and not acting on it, something we Americans are not the least bit familiar with.

America’s sub-tweeting on “The Ruins” doesn’t stop there, though. There’s also the Ambassador’s pink-blazer-bikini combo, which made me briefly proud of this ridiculous country I live in, before the devastating and well-deserved criticism of “if it’s in English, it’s for everyone!” the spookys is a casually bilingual show, where whether a character speaks Spanish or English seems to largely depend on the character. Take Tico and his daughter Sonia as an example: Tico has lived in both the US and Mexico, and he really wants to connect with his nephew Renaldo. Therefore, he alternates between languages. On the other hand, Sonia is indifferent and confrontational. She is primarily concerned with imposing her will on others, such as Renaldo’s little sister Beatriz, whom she is molding into a mini-me. So she only speaks English, even while she stays in a Spanish-speaking home.

Tati is on her own planet, both in terms of language—“a little of neither,” as she tells Tico—and misogyny. The contradictions of Tati’s galactic brain and essentially childlike nature shine best in the divorce proceedings that open this week’s episode, where she leaves Juan Carlos’s fortune on the table but walks away from what Úrsula calls “a fun chapter “with a whole box of cookies and a yo-yo. Tati is an independent woman who doesn’t need a man and a misogynist who wouldn’t hire a lawyer because she could flirt with her future ex-husband. She is a radio transmitter, a conduit that simply absorbs and vomits out the many contradictions of life; no wonder she rarely has any human sense.

But Tati is getting closer to something akin to a feminist statement by rewriting Don Quijote, Tati’s version: Putting on our grad school caps for just a moment longer, we could rationalize this as performance art, a subversion of the white male canon by hijacking one of its foundational texts. Or we could say that since she exists beyond the space-time continuum, in her mind, she wrote Don Quijote before Miguel de Cervantes, and Hears stole the idea of here. Regardless, she keeps her busy.

Tico is the biggest problem for the spookys at this point: He means very well, but is so eager to fit in that he ruins the mood, either by disrupting the afternoon bone crafting time or by talking too loudly and discovering the archeological site. Renaldo is a reassuring presence, but even his easygoing, easygoing presence isn’t enough for Tico to relax. Perhaps some family bonding time in the graveyard might help, or an emergency exorcism to free Andres from the djinn who I wonder could be trapping him in a hallucinatory moral dilemma with a well-deserved tongue-in-cheek, given how easily he found a handsome widower. and rich with a swimming pool to save him from hell which is 15 minutes of work per hour.

It is not in Andrés’ nature to question good things when they come to him; his slope reminds her that he can do what he wants, when he wants. And he’s almost as adept at creating his own reality as Tati, which means he could actually have conjured this man into reality from his own imagination. But then why would there be children there? It all stinks, and with José Pablo Minor as a regular cast member and not a guest star, I have a feeling this won’t be the last we see of Juan Carlos this season.

Creating your own reality can be dangerous. By attempting to twist history to his own ends, namely to prevent its impending cancellation, Professor Robert Roberts sows the seeds of his own demise. Seeing how the whole scenario played out, I wondered if maybe The Espookys deliberately sabotaged it. Andrew seemed to take the comment about the earrings personally, and surely this group knows that skeletons don’t have ears. They love skeletons! They look at them all the time! How could they make a rookie mistake?

The implication is subtle, as are many of this week’s thematic threads. The balance between these sly lines and the goofiness of the laugh-out-loud jokes is hard to strike, but the writing and directing work together to make “The Ruins” work on multiple levels, therefore, the blow back up to five stars.

• Andrés’ intern Village People replaces a nurse with an “Indian” because we are in 2022 and the spookys don’t fuck with those kind of stereotypes, thanks.

• Here very few questions are being asked about the origin of these three human skeletons or what Andrés wants with the third one. Oh good!

• Is Professor Robert Roberts’ comment that “two, maybe three” queer people worked on his ill-advised gay skeleton stunt a reference to Renaldo’s ace trip this season? Or Ana Fábrega, who identifies as queer in real life? You be the judge!

• Speaking of the good teacher, you may recognize guest star Ikechukwu Ufomadu from his appearances on Ziwe other three busy debras or of Judas and the Black Messiahwhere he played a secondary role.

• “But Úrsula, politics doesn’t affect me at all!”

• What would be your combo of campaign promises for Mayor Teresa Lobos? I’m going with a personal pizza and a photo with the sea monster.

Keep up with all the drama from your favorite shows!

By submitting your email, you agree to our Terms other Notice of Privacy and to receive our correspondence by email.

Why This Longtime Democrat Backs Zeldin Against Hochul

Russia's military is stepping up its attacks on civilian infrastructure in Ukraine as it "faces setbacks on the front lines," the UK Defense Ministry...
Read more