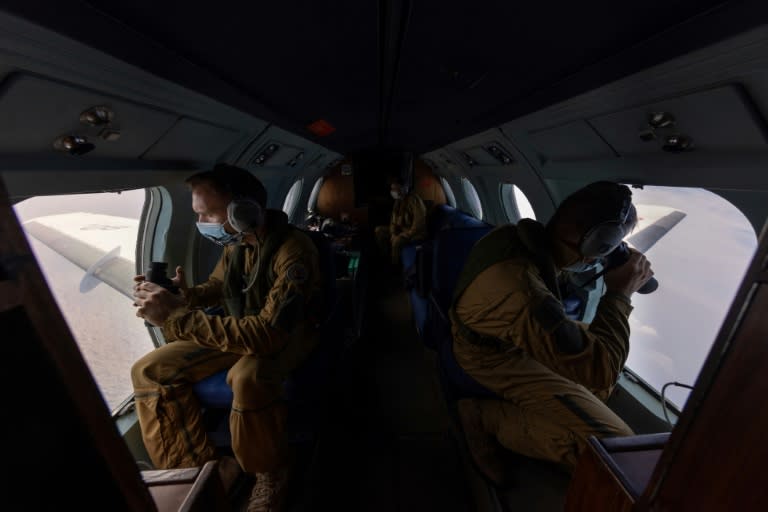 Flying over the Yellow Sea between Korea and China, a French naval crew scans the ocean’s surface for signs of contraband bound for North Korea.

The team is part of an international mission that imposes UN sanctions on Pyongyang, making surveillance trips from the US base of Futenma to Okinawa in Japan.

“The UN sends us information on ships suspected of illegal behavior,” then a flight plan is drawn up, explained Guillaume, the lieutenant commander who leads the team and can only be identified by his name.

Aboard their Falcon 200 aircraft, the six-person team uses the ships’ radar and AIS, the automatic identification system that transmits information including a ship’s identity and its route.

But their best tool remains visual observation: two crew members sit by the plane’s windows, scan the surface of the ocean with binoculars, and take photographs.

“We are the eyes of the United Nations in the area,” Guillaume said.

Suddenly, the team is on high alert: a ship has been spotted with its AIS disabled, a move considered suspicious behavior.

Pilots route the plane, making two passes at an altitude of less than 150 meters (500 feet), looking for the name of the boat on the stern and trying to establish radio contact with its crew.

Informing the team before the flight, Guillaume stressed the importance of a “friendly and professional response” in case of suspicious behavior.

“In the context of international tensions in the area, the goal is to avoid poisoning the situation. We must be firm but courteous.”

– “The credibility of France” –

A little further away, the team spots two ships stationary, hull to hull.

A first step reinforces the suspicions: the pumping tubes connect the largest of the ships, whose waterline indicates that it is fully loaded, to the smaller one, a merchant ship.

The latter is “ideal for transporting contraband, but it could also simply be a refueling for fishermen,” explains one team member.

When contact is made with the larger boat, the crew declares that they are unaware of why the smaller boat is attacked.

The French team collects as much information as possible on the ships to be sent to the UN, which will investigate for violations of resolutions 2375 and 2397 which restrict the sale, supply and transfer of natural gas and oil to North Korea.

If a breach is found, a case could move forward against the ships and their owners.

The team arrived in Japan from their base in French Polynesia in mid-October.

French forces have regularly participated in surveillance missions since 2018, along with eight other countries and under the supervision of the enforcement coordination cell responsible for implementing UN resolutions.

For France, the missions are also a way to raise its profile in the region, following the presentation of its Indo-Pacific defense strategy in 2019.

France has 1.6 million citizens and a vast nine million square kilometer exclusive economic zone in the region, which has particular strategic value given Beijing’s growing territorial ambitions and US-China tensions.

And his mission under the auspices of the United Nations also illustrates “his interest in the region beyond its Indo-Pacific priorities,” said Hugo Decis, a research analyst at the International Institute for Strategic Studies in London.

It confirms “the ability of French forces to work with their partners and allies and in this sense contributes to the credibility of France as a power, albeit a secondary one, in the Pacific”.