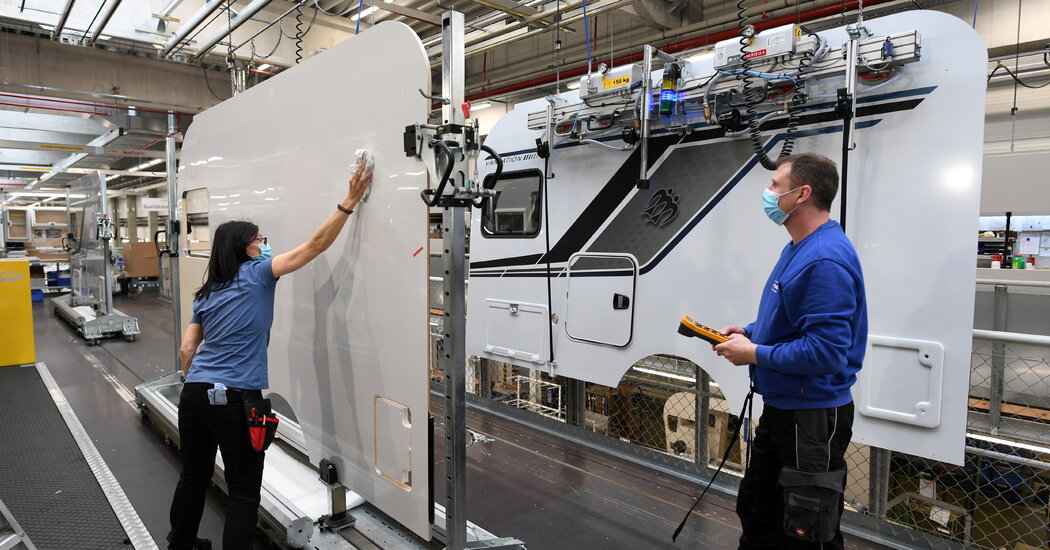 Persistent shortages are dragging down the German economy, Europe’s largest, as companies struggle to fulfill orders because needed parts or raw materials don’t come from overseas.

Polls and data released this week indicate that the supply chain crisis is the main factor slowing German manufacturing power, prompting the government to scale back its economic growth forecasts for 2021. Many economists now predict that the situation will not improve until well into 2022.

Industrial production fell 1.1% in September from the previous month, according to data published on Friday by the Federal Statistical Office. The decline was driven by a decline in the production of mechanical, electrical and data processing equipment.

More than 90 percent of all automotive and electrical equipment manufacturers said their production was hampered by a lack of supplies, according to a investigation released Wednesday by the Ifo Institute. Some economists predict that the shortage could result a “bottleneck recession”.

And last month, the German government cut its projection for economic growth for the year to 2.6 percent, down from an estimate of 3.5 percent in April, citing supply chain problems and rising prices. energy prices.

“There will not be the final shot we had hoped for,” said Peter Altmaier, economy minister in Chancellor Angela Merkel’s interim government.

But the government predicted the economy will gain momentum in 2022 and raised its estimate for next year’s growth to 4.1 percent from 3.6 percent, reflecting more shipments of microchips and commodities.

This projection reflects the expectation that an order backlog will be able to be filled in the coming months. Data released Thursday showed industrial orders rebounded less than expected with a 1.1% rise in September, following an unexpectedly large decline in August.

Given the demand, some economists believe that with an increase in shipments forecast for the first part of next year, the German economy is positioned to improve, even if it will not be immediate.

“There is potential for an upside,” said Carsten Brzeski, an economic analyst at ING Bank. “Only a small improvement in industrial production is needed to see positive growth.”

One of the biggest threats, however, remains the coronavirus pandemic.

Germany faces a fourth wave of infections, with a record number of new infections, 33,949, recorded in a 24-hour period Thursday. This could prevent people from going out shopping or dining, jeopardizing an expected increase in private consumption that has proved to be one of the bright spots in the German economy, and hitting the country precisely with the arrival of the holidays, a highlight for consumer spending.