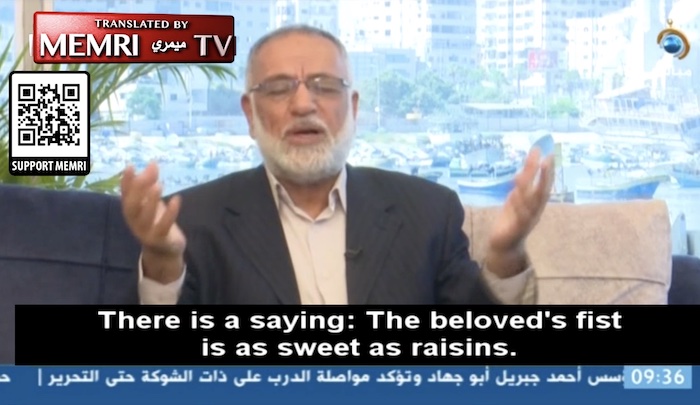 “It should be a therapeutic beating, rather than vindictive.”

Okay, but this distinction is very subjective. There is domestic violence in all cultures, but only in one does it have divine sanction. The Qur’an teaches that men are superior to women and should strike those from whom they “fear disobedience”: “Men have authority over women because Allah has made some superior to others and because they spend their wealth to maintain them. Good women are obedient. They keep their invisible parts because Allah has protected them. As for those of whom you fear disobedience, admonish them and send them to separate beds and beat them. “- Quran 4:34

Aisha, Muhammad’s girl bride, says in a hadith that Muhammad “hit me on the chest, causing me pain, and then he said, ‘Did you think that Allah and His Apostle would treat you unfairly?’” – Sahih Muslim 2127

Another hadith reads: “Rifa`a divorced his wife, after which AbdurRahman bin Az-Zubair Al-Qurazi married her. Aisha said that the lady (came), dressed in a green veil (and complained to her (Aisha) about her husband and showed him a green spot on her skin caused by the beatings). It was the custom of women to support each other, so when the Messenger of Allah arrived, Aisha said: ‘I have not seen any woman suffer as much as believing women. Look! Your skin is greener than your clothes! ‘”- Sahih Bukhari 7.77.5825

“Dr. Ziyad Miqdad, Director of the Fatwa Committee of the Islamic University of Gaza: As a father beats his son or a mother her daughter, beating the wife should be therapeutic, not vindictive.” MEMRI, July 19, 2021:

Dr. Ziyad Miqdad, director of the Fatwa Committee of the Islamic University of Gaza, said that when a husband hits his wife, according to the Quran, the beatings should be done symbolically and should not hit the wife in a way that causes injury. He made his comments on a program that aired on Al-Aqsa TV (Hamas – Gaza) on July 8, 2021….

Ziyad Miqdad: “The purpose of [wife] To hit is to warn the wife that the life of the family is in danger, and that martial relations are in danger, and that she must be cautious and not let the family be destroyed and that our children and our future are not in danger. [adversely] affected. The beating must be symbolic. In case the beating is real, certain terms and provisions must be adhered to. In the first place, the purpose of the beating must not be to retaliate or cause harm. “

Interviewer: “So there are certain restrictions on this beating.”

Miqdad: “Yes. First, the goal should be to repair [her ways] and protect [family] life. Second, when you hit [your wife] You should avoid hitting sensitive parts such as the face or vital organs, etc. It shouldn’t be a harsh and vindictive beating. We are talking about your wife. There is a saying: The fist of the beloved is sweet as raisins. A husband’s beating of his wife, if it occurs, should be like a man beating his beloved. Join me in imagining what it should be like to hit someone you love. It is like when a father hits his son, or when a mother hits her daughter for doing something wrong. It should be a therapeutic beating, rather than vindictive. The goal is to correct the width and warn you that you did something wrong, and only in cases where you do not respond to management and [husband] abandonment [her in bed]. Hitting should be the last resort. Therefore, this [Quranic] the verse protects martial life and family. “

Major Charles Haynes Appointed as Coordinator of Shootings Involved by Officers, the Center for Criminal Information and the Digital Forensic Analysis Unit | Mississippi News and Politics