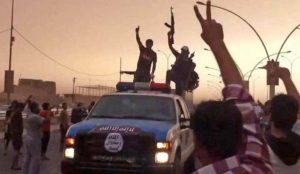 “The most important thing is the intellectual and ideological influence that ISIS has on the people.”

Why does ISIS have that intellectual and ideological influence, if it represents a distortion and hijacking of the peaceful religion of Islam, as we are constantly being told by non-Muslim politicians in the West?

Anyway, regarding the revival of ISIS in Syria and Iraq: thank you, Joe! America’s weakness around the world is encouraging jihadists everywhere.

As much of the Western world focuses on the growing threat of the Islamic State group affiliate in Afghanistan, the new intelligence services suggest that there are still reasons to worry about the core of the terrorist group in Syria, according to Voice of America (VOA). Iraq.

Reduced to around 10,000 fighters, a small fraction of what it boasted at its peak, and working in small clandestine cells in the two countries, the terrorist group, also known as IS or ISIS, tried to keep what intelligence and forces armed officials describe it as a low-level insurgency with varying degrees of success.

But US military and intelligence officials warn that the group’s fortunes may begin to change, which could allow it to recapture territory in Syria and Iraq and its leaders to assert greater influence over affiliates and followers around the world. .

“Ready to step up the business”

In Syria, in particular, IS appears “poised to ramp up activity … after a period of recovery and recovery,” the Defense Intelligence Agency told the Defense Department Inspector General in its newly released quarterly report on US operations. in the area.

The DIA said IS activity began to resume in September, with a growing number of attacks in Syria’s central desert against forces loyal to Syrian President Bashar al-Assad.

Other targets have included fuel infrastructure and refueling routes, and even Iranian-backed militias, the DIA said.

US military intelligence officials also said there is evidence that IS has relocated some fighters from the central desert to northeastern Syria, where local officials say the terrorist group is finding other ways to expand.

“ISIS is not limited to just a military presence,” Elham Ahmad, executive chairman of the Syrian Democratic Council, told reporters last month on a visit to Washington.

“The most important thing is the intellectual and ideological influence that ISIS has on the people,” Ahmad said, warning that the terrorist group has established cells in key cities such as Raqqa and Deir el-Zour.

“The re-emergence of ISIS is quite possible,” warned Ghassan al-Youssef, co-chair of the Deir el-Zour Civic Council. “I am able to regroup to raise funds to become stronger.”

IS has found fertile recruiting ground in IDP camps like al-Hol, which are home to nearly 60,000 women and children, many of whom are linked to dead or captured IS fighters.

Despite the efforts of US-backed Syrian Democratic Forces, US military intelligence officials warn, IS “retains the ability to radicalize, intimidate, recruit and conduct attacks” ….