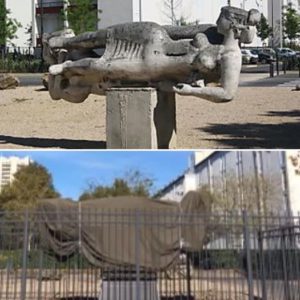 We researched and interviewed the local residents who come into daily contact with this statue donated to the city of Montereau by the great sculptor Volti. The work has long been installed in Surville and symbolizes the Seine and the Yonne. The testimonies collected are nothing short of surprising: “The statue was covered for more than a month. We have seen workers who were busy with it. They were just at work. We asked and they explained that some children had thrown stones at the artwork and it had been damaged, which is why it is now being restored, “says a resident who walks along the esplanade every day.

He added: “But I don’t know if that’s the real reason. “A little further on, a group of women nodded:“ The statue of Faces cannot be missing. It is right in the middle of the path that visitors to the mosque take. It represents two naked women, the Senna and the Yonne, intertwined. So it’s insulting. It is an insult. It must be hidden, veiled. They must in no way see or reveal anything. “