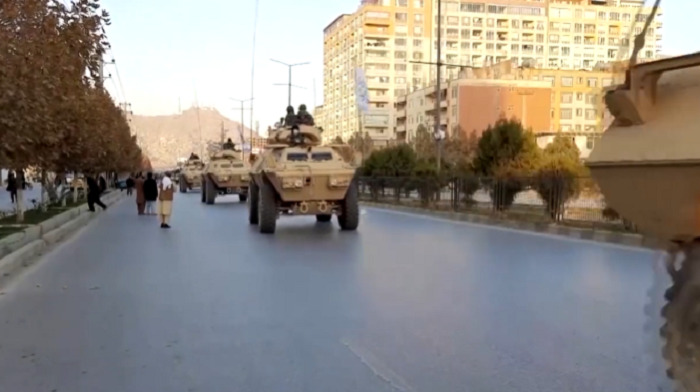 The Taliban reportedly held a parade with American military equipment abandoned during the Biden administration’s disastrous withdrawal from Afghanistan over the summer.

According to a report by the Agence France-Presse, the military parade included Humvees and US armored helicopters, rolling through the streets of Kandahar, a city they describe as “the spiritual heart of the militants.”

Reuters describes the show of military weapons as proof that the Taliban are undergoing a “transformation from an insurgent force into a regular army”.

They “used the large stock of weapons and equipment left behind when the former West-backed government collapsed in August to review their strength,” the outlet notes.

Taliban forces held a military parade in Kabul using captured American-made armored vehicles and Russian helicopters in a show that showed their ongoing transformation from an insurgent force to a regular army. https://t.co/v4q9fSm5YL pic.twitter.com/SW6RzjoHMu

RELATED: Trump has an idea for the billions of weapons Biden left to the Taliban

The Taliban organize a military parade – Thanks, Joe!

Reuters goes on to define the military equipment used by the Taliban during the parade.

The MI-17s are a Russian military helicopter of Soviet design.

VIDEO: The Taliban hold a military parade in Kandahar, the second largest city in Afghanistan and the spiritual heart of the militants, using vehicles and helicopters of former Afghan and international forces to inaugurate their new “Islamic Emirate Army” pic.twitter.com/IsH4z9tRL2

Reports began to emerge that the Taliban got their hands on American military equipment soon after the United States withdrew from Afghanistan.

The total net worth of that equipment has been disputedAs the figures for the funding of the Afghan army included not only weapons, but also the cost of training and other items.

What it is not disputed, however, is that the equipment What left behind to be acquired by the Taliban.

Pentagon spokesman John Kirby admitted the Biden administration had “no political solution” to recover or destroy the weapons.

“I don’t have an exact inventory of what equipment Afghans had at their disposal that could now be at risk,” he said.

It can start with a baseline of all equipment that appeared in the Taliban military parade.

Kirby, in an interview with CNN in late August, described the equipment inspected by Taliban fighters in a hangar at Kabul airport in Afghanistan as “demilitarized” and therefore “unusable”.

Parrying these items on the streets is certainly not an indication that the Taliban have the ability to actually shoot weapons.

However, Kirby very clearly implied that the vehicles were inoperable.

“They can inspect as much as they want. They can watch them, they can walk, but they can’t fly them. They can’t make it work, “he explained.

“We made sure to demilitarize all the tools at the airport to render useless,” Kirby said, adding that there were only “a couple of fire trucks and a few forklifts” that were operational.

The video above does not show any fire trucks or forklifts.

Kirby, of course, has a problem with the media, as he can simply pretend to ignore and notice that it is impossible to connect this equipment to the airport.

“At the airport” is one hell of a modifier.

Other Kirby: We have rendered the military equipment abandoned before leaving Afghanistan inoperablehttps://t.co/b9hUQGOxoa pic.twitter.com/ZtKRMbttD1

Regardless, the Taliban are clearly driving US military vehicles. And now, according to these reports, they are flying Russian helicopters. How long will American helicopters remain “unusable”?

Fox News reported in September that “most of the American and Afghan military equipment at the Kabul airport was destroyed by US forces.”

“This is not the case for the rest of Afghanistan,” reveals the then report. “There are thousands of Humvees, planes and other critical pieces of military equipment now left in the hands of the Taliban.”

Reuters reports that a large portion of the weapons in the hands of the Taliban came from Washington.

“Most of the weapons and equipment that the Taliban forces are now using are those supplied by Washington to the American-backed government in Kabul in an effort to build an Afghan national force capable of fighting the Taliban,” they write.