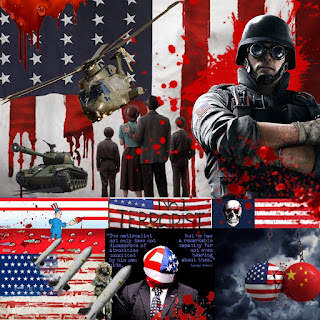 After creating a putrid pit of ungovernable nations in the heart of the Middle East, Joe Biden signaled that the so-called nation-building concept has been abandoned. Entering nations with firearms, falling bombs and flying missiles is now apparently history as a policy.

Did you adopt the ethos behind John Lennon’s famous peace campaign, “WAR IS OVER”?

America has learned the hard way that its chauvinism-fueled arrogance and self-esteem end in failure. What they have learned has come at the expense of hundreds of thousands of lives and the destruction of the way of life of many others. All this in addition to creating an even more favorable environment for international terrorism. Lost livelihoods and unstable governments create poor places where some form of democracy can grow, the greatest chance being for continued poverty, scarce life chances, chaotic and criminal despair, and the rise of brothers in arms. Brothers in arms against everything the West stands for.

Hopefully, America has indeed learned that the enormous costs in terms of its own blood and treasure and those of others were not really “worth it” and were quite counterproductive.

But does this mean that America’s war against the world is over?

He’ll use at least two other ways to wage that war.

One will be conducted primarily through its intelligence agencies, its mass media and its special forces. The targeted nations will be subject to undermining in every possible way through the use of domestic activism, cyber espionage and sabotage, disinformation and propaganda campaigns, the use of criminal and ambitious selfishness along with hopelessly naive to overthrow governments and therefore chaos in every possible way.

The second of the three ways the US has chosen to wage war on the world is through economic sanctions and financial restrictions. By using its power to force other nations to strangle targeted economies along with its own capabilities to do so, it is able to impoverish a nation and its population by destroying its economy. Nations that try to help those nations are treated by the United States as criminal entities and they too are targeted. Venezuela, Syria and Cuba are currently the three primary targets for waging this type of war.

Of course, the latter two forms of warfare, or state terrorism if you prefer, are also lethal forms of warfare. Not that dramatic and largely hidden, but deadly nonetheless. Tens of thousands have died in Venezuela due to economic sanctions and financial restrictions imposed on them. During the long years of sanctions on Iraq before the start of the hot war, many thousands of children are known to have died as a result of the ruthless sanctions applied at the time.

Afghanistan may have rubbed America’s face in the shit it creates when it goes to war … but don’t be under any illusions, the US is still fighting its war against the world and it is still having a lethal effect. The hot wars have created the crucible for terrorism and endless instability to come, both within those destroyed nations and those that destroyed them. The two forms of warfare that are applied in tandem with the first continue unabated. The United States, in its arrogant stupidity and arrogance, has set the world on a course that cannot help but be torn apart by continued instability and war.

Unless now wiser leaders of the East can prevail, making the most of the bloody defeat of the West. Only this perspective can ameliorate the devastation caused by the US and attempted devastation through its secondary forms of warfare which it will now seek to expand to achieve its completely wrong goals.