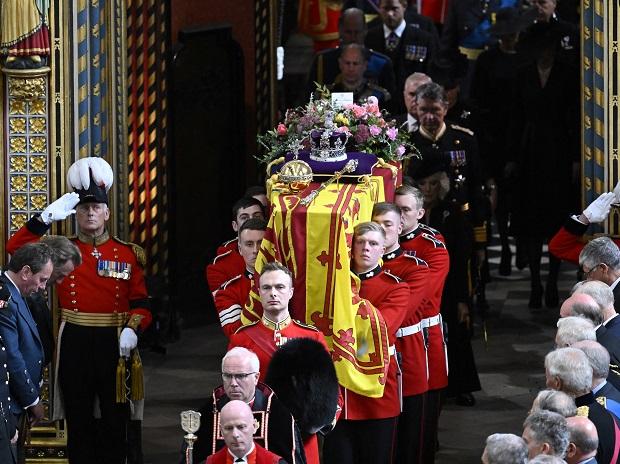 Kings and queens, world leaders, tearful mourners lining the streets and gathering around screens said their final goodbyes to Queen Elizabeth II on Monday, as Britain’s longest-serving monarch was laid to rest in a historic funeral ceremony held with military precision on a scale never seen before. seen before

The UK observed a two-minute silence in a moving nationwide tribute at the end of a majestic state funeral ceremony at Westminster Abbey here, attended by thousands and watched by millions on screens around the world.

In the congregation of around 2,000 made up of world leaders, royals from the UK and abroad and community leaders, India was represented by President Droupadi Murmu and Foreign Secretary Vinay Kwatra.

The UK’s national anthem, ‘God Save the King’, resounded as the coffin was lifted for the last leg of the journey to the late monarch’s final resting place at St George’s Chapel in Windsor Castle, where he concluded a engagement service to the public. -Frontal appearance of the funeral before a private burial ceremony on Monday night.

The Queen’s coffin was then lowered into the Royal Vault in preparation for her final resting place beside her late husband of 73 years, Prince Philip, in a historic chapel enclave on his estate in south-east Windsor. from England.

“We have come together to commend into the hands of God the soul of his servant, Queen Elizabeth,” said the Dean of Windsor, at the final service prepared in talks with the late monarch “over a number of years.”

The state funeral began as the chimes of Big Ben silently rang out and hymns resounded as the late monarch’s coffin was carried into Westminster Abbey on Monday morning.

Big Ben, the iconic London monument located in the Elizabeth Tower named after the late Queen, chimed every minute 96 times to commemorate each year of the late sovereign’s life as a procession led by King Charles III entered the historic 11th century abbey.

The coffin, draped with the Royal Standard, was adorned with flowers from the King’s royal houses and a personal note “in loving and devoted memory” of him and the Instruments of State, comprised of the diamond-encrusted Imperial State Crown and the orb and scepter that were presented to the Queen at her coronation in the same Abbey in 1953.

“Here, where Queen Elizabeth married and was crowned, we gather from across the country, from the Commonwealth and from the nations of the world, to mourn our loss, to remember her long life of selfless service and with the sure confidence to commit ourselves. her to the mercy of God our maker and redeemer,” said the Most Rev. Dr. David Hoyle, the Dean of Westminster who led the service.

“It is with gratitude that we remember her unwavering commitment to a high calling for so many years as Queen and Head of the Commonwealth,” he said.

“With admiration we remember his sense of duty and dedication to his people of all life. With thanksgiving we praise God for his constant example of faith and Christian devotion. We fondly remember his love for his family and his commitment to the causes he championed. darling,” Hoyle said.

The hour-long service included a collection of traditional hymns and new pieces of choral music, created especially for the occasion.

The Secretary General of the Commonwealth, Baroness Patricia Scotland, and the British Prime Minister, Liz Truss, read Bible lessons, followed by the hymn “The Lord is my Shepherd”, which had also been sung at the wedding of then-Princess Elizabeth and Prince Philip in 1947

“Her late Majesty stated in a 21st birthday broadcast that her entire life would be dedicated to serving the nation and the Commonwealth. Rarely has she fulfilled such a promise so well. Few leaders receive the outpouring of love that we have seen,” Archbishop of Canterbury Justin Welby said in his sermon.

“The sorrow of this day, felt not only by the late Queen’s family, but by the entire nation, the Commonwealth and the world, stems from her abundant life and loving service, which is now gone from us.

“It was joyful, present for so many, it touched many lives… All those who follow the example of the Queen, and inspiration of trust and faith in God, can say with her: ‘We will meet again,'” he concluded. in the words of the late monarch’s memorable COVID pandemic lockdown broadcast.

As the clock struck 11 am local time, the Queen’s eldest son and heir, Charles, followed the coffin, which had been in Westminster Hall since last Wednesday, in a solemn procession, accompanied by his sons, the Princes William and Harry, and their siblings, Princess Anne and Princes Andrew and Edward.

William’s children, nine-year-old Prince George and seven-year-old Princess Charlotte, were among the youngest members of the royal procession, which walked between their parents, the Prince and Princess of Wales.

There was military precision at the ceremony after days of rehearsals by the nearly 6,000 armed forces personnel who participated in the grand ceremony.

The coffin was then carried in procession on the state carriage used for royal funerals to Wellington Arch in central London to be carried by the state hearse to Windsor.

The event was viewed by millions of people across the UK and around the world. Thousands lined the streets and gathered in parks around the capital to listen to the service, with many moved to tears.

It was the first state funeral since Winston Churchill’s in 1965 and the largest ceremonial event since World War II.

Queen Elizabeth II, 96, died peacefully at her Scottish residence at Balmoral Castle on September 8, marking the start of the UK’s period of state mourning, which has seen thousands line up. unprecedented in London to pass in front of the house of the late monarch. coffin lying in state.

(Only the headline and image in this report may have been modified by Business Standard staff; all other content is auto-generated from a syndicated source.)

A scorching heat wave was pushing California's power grid to the brink of blackout earlier this month when, in a desperate bid to keep...
Read more

The latest variation of the popular game Wordle could be music to your ears.ear puts a twist on Wordle by having players guess a...
Read more

After record deforestation and environmental deregulation in recent years, the outcome of the Brazilian elections could well determine the fate of the Amazon rainforest.
Read more