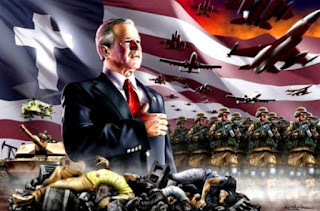 Western elites have built for themselves an undisputed, impermeable and impregnable reality of groupthink that informs everything they do.

Within this mental boundary, some concepts are sacrosanct. The thought of removing these concepts within this cult group is unthinkable.

Omnipresent reality is held firmly in place by its overwhelming need for the entire structure of the Western elite that would immediately begin to collapse without it.

The concepts within this reality have become an undisputed dogma that no single individual or group within the whole can in any way undermine. Any individual or group attempting to do so would suffer immediate expulsion from the group thought bubble, the remaining elites exist within.

The concepts within the Western elite’s bubble of belief and the boundary of groupthink are well known and hardly require delineation. Concepts concerning the exceptional, superiority, freedom and democracy, the aura of being pervaded by a grave responsibility to enlighten, influence, persuade and coerce others to their way of thinking that comes from the exercise of the enlightened power that empowers them to carry the torch of impeccable western liberal values ​​before them.

With these concepts, precepts and principles imbuing them with virtual perfection, why should Western elites conceive other realities as to some extent valid? This, however, is the most vital requirement of the diplomatic approach where the possibility of a negotiated compromise becomes possible. When you consider the reality of your way of existing and your political environment as perfect and universally applicable as a dogmatic principle that requires global distribution, would you tie it to any form of compromise?

This way of thinking, while it can also be called rational thinking at this stage of undisputed faith in the reality demanded by all Western elite participants, offers the current geopolitical warfare that we see reflected in the Western approach to those aiming for change. He sees no benefit other than in the short term in compromising along the path to the ultimate goal, the transformation, by force if necessary, of everyone else to his own virtually holy standard.

This evangelical requirement to convert others and bring them into the sacred fold of perfection makes unreasonable fanatics of its leaders and those within the bubble of faith in their cult status. All who are outside their sphere of perfection are seen as impure heretics who may need to be indulged before their last conversion in these modern times, rather than simply put to death as in the past.

What role can true diplomacy play when you conceive of yourself as perfect and that there is a vital need and an existential requirement to convert everyone else? How can you bring yourself to negotiate a lesser outcome than the heretics’ total submission to your demands? A pretense of diplomacy can be used as a trap, being an unpleasant necessity but only for a temporary period, while reaching the ultimate goal of the complete dissolution and conversion of the heretics. Nothing can be contemplated that comes close to true diplomacy that could risk leaving evildoers able to continue their diabolical activities unhindered. Engaging in such an activity would be seen as a totally unfair “devil’s business” in the current mentality of the Western elite.

As the most zealous of the zealots occupy the most powerful positions within the church of the perfect system, the most common characteristics will be a stream of lectures and inquiries addressed to the impure below them. The dogmatic thought processes revealed in those moments show how impossible it has become to be impermeable to true reason and to the will to compromise the reality of worship within the Western elite.

Just as in evangelical Christianity, where its main adherents and supporters have compared themselves to the soldiers who defeat the servants of the Devil to save the souls of humanity, so too do Western political elites see themselves in a similar light. They conceive of themselves as bringing before themselves the light of democracy, all imbued with the solemn and holy mission of overthrowing those who deny that holy light to others. How, in the name of heaven, could they compromise in this task and thus leave some poor souls in the dark? So they too are soldiers, and they got used to fighting the ‘long war’ with all the means deemed necessary.

War mode allows you to tell almost everything about an enemy and anything done to that enemy in light of the conceived final vital goal. All ethical values ​​can be set aside for the greater good of that ultimate goal. All ethical and moral concerns, such as those concerning truth and lies, can be cast aside while the war mode prevails. All is lawful in love and war and when you love yourself by conceiving yourself and your systems as the holiest and most perfect of all, then all your actions become righteous, even at the cost of millions of lives. Kidnapping and torture thus become “unfortunate necessities”, as do the dirtiest tricks of covert subversion coupled with fabricating useful lies with distorting and undermining journalistic integrity.

The punishment of those heretics who reject all attempts at “diplomatic” conversion to the obvious “truth” of Western superiority is seen in acts of mass murder. All fully justified seen through the eyes of those who have the indisputable and largely undisputed goal of creating the best of all possible worlds.