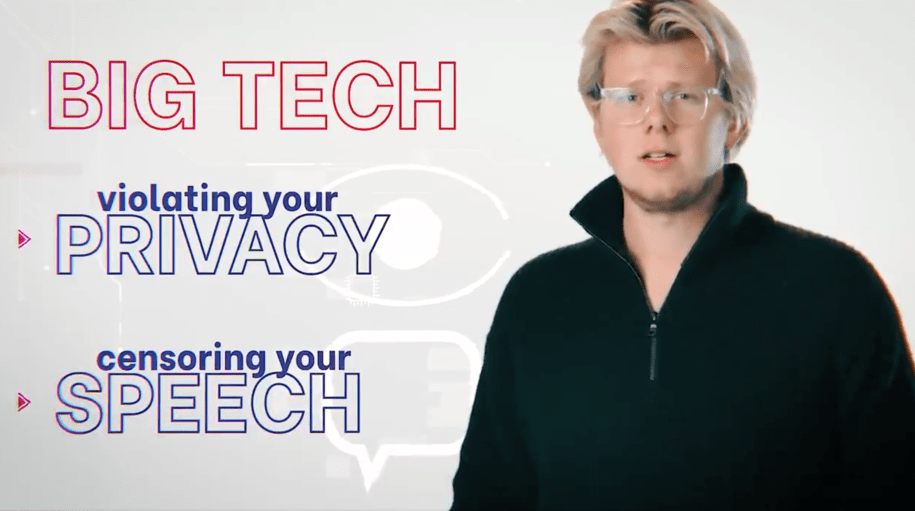 This is how Finman introduced Freedom Phone to the world.

Today I am announcing the Freedom Phone.

This is the first major rejection of the big tech companies that attacked us, simply for thinking differently.

Complete with its own uncensored app store and privacy features.

FINMAN: “Name a time in history where the people who banned books, the media, and opinions were the good guys.

Hi, I’m Erik. I am the youngest Bitcoin millionaire in the world. I did it in Silicon Valley and I have already accomplished a lot in my life. But now I am leaving Big Tech to fight for freedom of expression because the Big Tech gentlemen are violating their privacy, censoring their speech, and I think that is very wrong. That is why I created Freedom Phone and its uncensored app store.

“Everybody complains about Big Tech censorship, but nobody does anything about it. They say, ‘Build your own phone’, and I did. Freedom Phone is truly the best phone in the world. It does everything your current phone does, except censor and spy on you. With Freedom Phone, your freedom of expression is our number one priority. This is why we created our own app store that is completely uncensored.

“If an app you love has been banned from the major app stores, you can still download it from ours because we don’t ban apps, period.”

And it goes on and on and on.

Of course, there is some irony in the way that Finman has responded to his early critics. Behold!

Oh yeah. That’s the same Mr. Freedom Phone, furiously hiding responses to his pitching tweet … and blocking Twitter members who are mean to him.

Not a great start, buddy.

Pretty sarcastic, huh? Of course, that’s exactly the kind of soft teasing you can expect on a free, open, and active social media platform:

Other users were skeptical of the technological promises of the Bitcoin success story that describes itself as a baby.

Just to inform you, if you use google maps or any other map app on this phone, you completely lose your privacy and you are being tracked.
This phone sounds good on paper, but it can’t really keep you private. Privacy depends on the hardware and software you use

It was later discovered that Finman did not “create” the Freedom Phone.

More about dropshipping here, it is true that through the lens of Amazon, which wants people to use its “drop shipping alternative”, which Amazon users will recognize as “Amazon Compliance”. The short version? Finman is apparently putting a “Freedom Phone” logo on this phoneand leave the shipment to the manufacturer, who receives a cut.

Can we get ahead of the part where every fool who buys this phone has their identity stolen?

So this looks like just another cash grab from a self-described “Bitcoin millionaire”, whatever that means. I guess it means you bought Bitcoin when it was really cheap and sat on your butt waiting for it to increase in value. Oh wait yeah! That is exactly what happened!

In May 2011, at the age of 12, Finman struck a deal with his parents so that he could skip college in pursuit of an unorthodox education, whenever he could. invest successfully. The deal? He had to turn $ 1,000 in cash that his grandmother gave him into an impressive $ 1 million. Finman relentlessly pursued his goal and managed to succeed, buying around $ 1,000 worth of Bitcoin when the new coin was only $ 12 per coin, as well as several other digital currencies, including Ether, Ethereum’s native token. Finman succeeded in his goals, making him a self-made millionaire at the age of 18.

If you want to call him smart or just lucky, that’s fine. But what Finman It is not is a technology visionary in a unique position to launch a phone company. But you can surely spot a trend in all the white groans currently flooding the nation.

Hey, if there was an ETF or mutual fund that was indexed to the recent surge in white complaints, I’d buy it in a nanosecond from New York. The complaints from Trump and his troglodytes about Big Tech are mostly nonsense, of course, but that doesn’t mean you can’t monetize them, if you’re the kind of person who has already discovered the endless virtues of sitting around waiting for barrels of cash to go. get in.

Sadly, as we all know, being a millionaire doesn’t make you smart. If he did, Mike Lindell wouldn’t be wasting his MyPillow millions in a vain attempt to reestablish the Pig Kahuna.

Perhaps young Erik can lose his fortune as fast as he accumulated it. Now, wouldn’t that be a fucking shame?

Made comedian Sarah Silverman say “THIS IS VERY BRIGHT” and requested author Stephen King shout out “Pulitzer Prize !!!” (on Twitter, that is). What is it? The viral letter that launched four hilarious Trump trolling books. Get them all, including the ending, Goodbye, asshole: 101 goodbye letters to Donald Trump, to this link. Only $ 12.96 for the 4-pack! Or if you prefer a test drive, you can download the epilogue to Goodbye asshole for the low price of FREE.

Ashli ​​Babbitt’s husband on Newsmax: no information about his wife yet