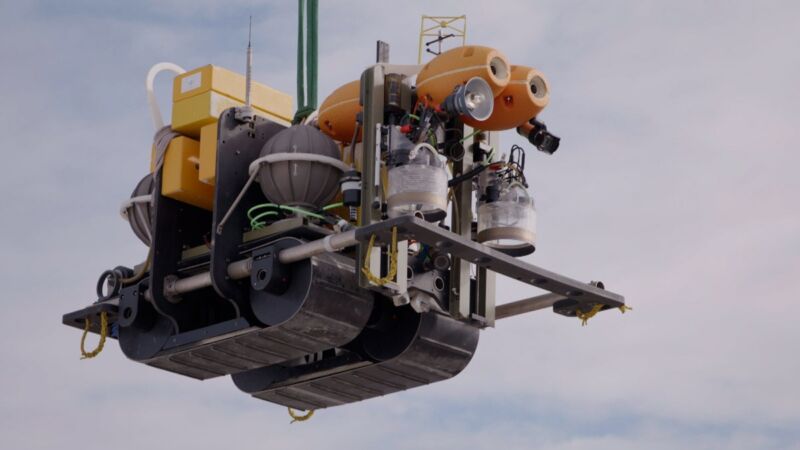 The Benthic Rover II is about the size of a compact car, although it rocks the treads, making it more like a science tank. This, along with the two googey-like flotation devices on the front, gives it a kind of WALL-E vibe. Except instead of exploring a litter littered landscape, BR-II wanders the Pacific seabed, 13,000 feet deep. The robot’s mission: roam the soft ground looking for clues to how the deep ocean processes carbon.

That mission begins with a wild ride, 180 miles off the coast of Southern California. Scientists at the Monterey Bay Aquarium Research Institute lower the BR-II into the water and then … drop it. Completely unencumbered, the robot falls into free fall for two and a half hours, landing on the abyssal plains – vast expanses of what you might generously call manure. “It’s mushy and dusty at the same time,” says MBARI electrical engineer Alana Sherman, co-author of a new document in Science Robotics describing the results of the robot’s adventures. “Which is part of why it’s a tracked vehicle and has these really wide treads.” That extra surface distributes the robot’s weight so it doesn’t sink into the sand.

If you wanted to devise the perfect way to torture a robot, that would be the deep sea. At these depths the water is cold, salty (and therefore corrosive) and very pressurized; there is a lot of liquid pushing the robot down.

As the Mars rover, this robot must be autonomous. In fact, in some ways it is also Moreover It’s hard to control a 13,000-foot-deep rover than a rover on another planet. Radio waves travel well in space, it’s just that they take up to 20 minutes every way to make the journey between Earth and Mars and good luck remotely piloting a rover in real time with that kind of delay. But the radio waves hate water. So instead, the BR-II uses beeps to talk to another robot, a floating glider that MBARI scientists release from the coast four times a year. The glider, essentially a very expensive surfboard, travels to the rover’s approximate location, pings it, collects status updates and sample data, and sends that information to a satellite that researchers can access.

Announcement
Since MBARI scientists can’t just sit in their labs and fly the rover, he’s on his own. But its directives are simple. Parked on the seabed, it drops two oxygen sensors into the mud. This provides the robot with a measure of biological activity in the sediment, as the microbes consume oxygen and emit carbon dioxide. The rover also has a fluorescence camera system that projects blue light, which causes chlorophyll in organic matter to glow. This gives the robot an idea of ​​how much debris from the surface water, known as “marine snow, “It is heading towards the bottom of the sea.

The rover sits in a place like this for 48 hours, then moves forward 33 feet. That’s it. “He wouldn’t know if he fell off a cliff – all he knows is that I should drive 10 meters forward,” Sherman says. “But luckily there are no cliffs around, so we take advantage of the simplicity of the environment to keep the robot simpler.”

However, there is a problem: oversized treads ruin the bottom. “Even though it moves very slowly, it doesn’t take long to create this huge dust storm,” says Sherman. “We always want to drive in the current so that it can push the sediment that is disturbed behind us.” So before the rover moves, it uses a sensor to get an idea of ​​the current direction of the … er, current, then heads straight for it.

The benthic rover does this for a whole year, unsupervised: park, take measurements, move 33 feet, repeat. Then the scientists steam out in their research boat to give it a battery change.