Trump responds to claims that General Milley feared a coup: 'I don't like a coup!'
Advertisement 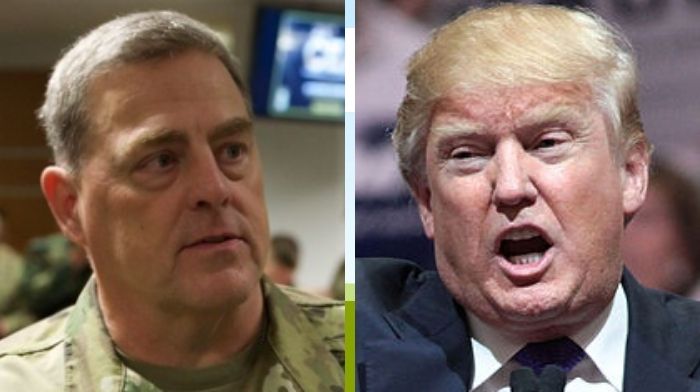 According to a new book by two Pulitzer Prize-winning journalists, Chairman of the Joint Chiefs of Staff Gen. Mark Milley feared that then-President Donald Trump I would try a hit if he lost the 2020 presidential election to Joe Biden.

Unsurprisingly, Trump lashed out at Milley in response.

The book “I Can Only Fix It: Donald J. Trump’s Catastrophic Final Year,” due out next week, was co-authored by Washington Post reporters Carol Leonnig and Philip Rucker.

Milley spoke to friends, lawmakers and colleagues about the threat of a coup, and the chairman of the Joint Chiefs of Staff felt he had to be “on guard” for what might come.

“They can try, but they are not going to succeed,” Milley told his assistants … https://t.co/5AJowsoeNZ

Milley on Trump’s possible coup: ‘They can try, but they won’t succeed’

According to the authors, General Milley began strategizing during Trump’s final months in office on how to protect himself against such an attempt by Trump or his allies.

The book claimed that Milley said of a possible coup to his closest MPs: “They can try, but they are not going to … succeed.”

The book claimed that in a conversation with former National Security Advisor Gen. HR McMaster, Milley said, “What the hell am I dealing with?”

McMaster reportedly responded, “You’re dealing with some of the strangest things in history.”

Trump said this is pure fantasy and said Thursday that he “never threatened or spoke to anyone about a coup by our government.”

“If I were to strike, one of the last people I’d like to do it with is General Mark Milley,” Trump said in a statement from his political action committee.

Trump also criticized Milley for apologizing after participating in the President’s June 2020 photograph at St. John’s Church in Washington.

Trump chimes in with a lengthy statement about General Milley: “I’m sorry to inform you, but an election is my form of ‘coup’, and if I were to strike, one of the last people I would want to do it with. it’s General Mark Milley ” pic.twitter.com/FYAixNygA6

“I saw in that moment that he had no courage or skill, certainly not the type of person I would be talking about ‘coup,'” Trump said.

Trump continued: “Despite the massive electoral fraud and irregularities during the 2020 presidential election scam, which we are now seeing in very large and important states, I never threatened or spoke to anyone about a coup by our government.”

General Mark Milley, chairman of the Joint Chiefs of Staff, thought Trump might attempt a coup after the election. He and other military leaders were ready to stop him.

He explicitly and repeatedly compared Trump to Hitler, and MAGA activists to brown shirts.https://t.co/n44m4zeR2H pic.twitter.com/reTrSUSPlG

RELATED: Report: Liz Cheney slapped Jim Jordan on the hand during Jan 6 protest: ‘You damn you did this’

“I’m sorry to inform you, but an election is my ‘coup’ way, and if I were to strike a coup, one of the last people I’d like to do it with is General Mark Milley,” Trump continued.

The former president continued: “He got his job only because the world’s most overrated general, James Mattis, couldn’t stand it, didn’t respect it, and didn’t recommend it.”

“For me, the fact that Mattis didn’t like him, like Obama didn’t like him and actually fired Milley, it was a good thing, not a bad thing,” Trump added. “I often act against the advice of people I don’t respect.”