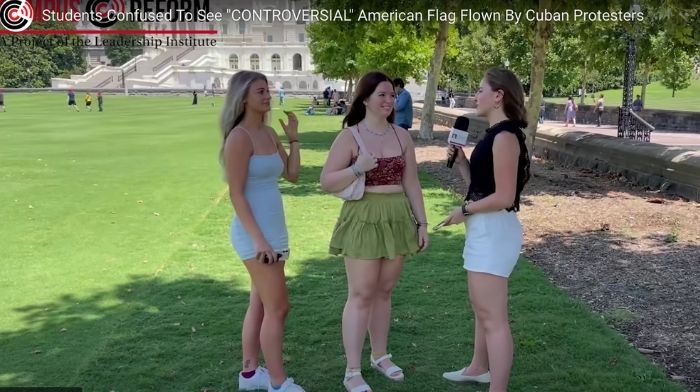 A video released by the Campus Reform group on Thursday shows young people, many of them ironically standing in front of the nation’s Capitol, they were asked what the American flag means to them.

The reporter, Ophelie Jacobson, then shows them photos of the recent protests in Cuba and other parts of the world such as Hong Kong and Venezuela, and asks interviewees why people from other nations wave American flags.

The responses were not only a chilling demonstration of the enormous failure of the American educational system, but also how young Americans are taught to hate America.

America is not that cool

What we have is a generation that is being taught that America is not an exceptional place, that it is a place full of racism and hatred, and should not be taken as an example.

Another student, a young African American, said of the flag: “It is a symbol of pain.” When asked if the American flag is a symbol of liberty and liberty, most of the students said no.

One person, just one, said they thought the American flag symbolized “peace, prosperity, and freedom.”

As if that wasn’t terrifying enough, Ophelie Jacobson then showed students photographs of ongoing protests in Cuba, in Hong Kong in 2019, and Venezuela. It was obvious that they had no idea why these people were flying American flags.

One student commented: “I mean we don’t represent a socialist government… so I don’t know why they would wave the flag. Honestly, I’m not sure. “

Another student said, “That’s a good question. It’s interesting to see them all wearing American flags and all that. “

Interesting, as an oddity standing next to the 8 foot tall man and the bearded lady at the roadside carnival. Insert the mandatory eye roll here.

RELATED: Joy Behar Accuses the Republican Party of Bringing America to a ‘New Version of the Middle Ages’

While some of the students ventured to guess that it could be that the Cubans were flying American flags because it is a symbol of freedomAnother student said that, “The stigma is that you come to America, you get everything you want, but then you come here and it’s actually very different. You have to work for your things. “

This girl said she was from Ukraine. You come to America and you get everything you want? Let’s hope Hunter Biden is not the model for immigration to the United States in Ukraine.

The idea is that these people waving American flags are just naive and don’t really know what is going on in America.

One young man even said that, of course, it’s “our demographic, it’s college-age people who have a firm understanding of what’s going on and all the inequalities in America.” Our young African-American friend said that no country should be placed on a pedestal.

it’s okay. Your humble correspondent likes to think that I remember what it was like to be young.

You are smart, with that, on the ball, you have all the answers. This may be where I officially become my parents, but newsflash, brat.

No, it is NOT your demographic that has a firm grasp of what is going on.

Your demographic eats Tide capsules and you’re not sure which bathroom to use. Is the News Block why Cubans flying American flags a mystery to you? Call the people at MENSA.

“The Princeton course offers what it presents as solutions to combat ‘built-in racial biases'” such as soap dispensers and facial recognition.

RELATED: The White House Admits They Are Actively Working With Facebook To Flag ‘Disinformation’

In fairness to these idealistic young men, they live in a hugely liberal city. Washington DC citizens voted for Hillary Clinton in 2016 and Joe Biden in 2020 by overwhelming margins.

Literally overwhelming. Both Hillary and Biden cleared 90 +% of the votes.

And they are listening to a News Block that studies show that it is increasingly liberal. Combine this with what we know about the ratio of liberal and conservative professors on college campuses, and it’s no wonder.

These young people have no idea of ​​the misery, extreme poverty and terror that six decades of socialism and communism have caused in the Cuban people.

These people are apparently unaware that the refugees are crammed into rickety boats and life rafts, making the 90-mile journey through shark-infested waters to the United States because they are so desperate for freedom.

One of the young women interviewed had this assessment of the flag that those who make the aforementioned trip see as a symbol of liberty and liberty: “No, I don’t think America is as free as people think. It’s just a piece of cloth at the end of the day. ”

But everyone else is naive.

Check out the full video here.

Every kid loves to run through a sprinkler