An American journalist jailed for six months by Myanmar’s military rulers said after his shocked release that he fought to stay sane and feared his ordeal would not end, while insisting that he should never be arrested.

Danny Fenster – sentenced to 11 years last week for instigation, illegal association and violation of visa rules – was released on Monday, one day before facing charges of terrorism and sedition that could have seen him incarcerated for life.

WATCH | US journalist detained in Myanmar pardoned and released

The 37-year-old looked gaunt, with his hair and beard that had grown longer during his captivity, as he emerged from a jet in the Qatari capital Doha with former US diplomat Bill Richardson.

“I was arrested and held in captivity for no reason … but physically I was healthy,” he told reporters at the airport.

I was not hungry or beaten.

The Burmese military has crushed the press since taking power in a February coup, arresting dozens of journalists critical of its crackdown, which has killed more than 1,200 people according to a local monitoring group.

READ | The US journalist jailed in Myanmar “was very keen on the truth”, says his colleague

Fenster worked at Frontier Myanmar, a local outlet in the Southeast Asian country, for about a year and was arrested on his way home to see his family in May.

“I feel fine physically. It’s the same hardship that comes with any form of incarceration. You’re just going a little crazy,” Fenster said.

“The longer you drag on, the more you worry it will never end. So that’s the biggest concern, staying sane through this.”

Fenster is believed to have contracted Covid-19 during his detention, family members said during a conference call with American reporters in August.

The United States, which had claimed that Fenster was being held unfairly and unfairly, welcomed his release.

“I just spoke to American journalist Danny Fenster, who is free from prison in Burma and is about to be reunited with his family in the United States,” tweeted Secretary of State Antony Blinken.

I can’t wait to welcome you home, Danny.

The junta said Fenster was pardoned and released on “humanitarian grounds”, ending 176 days in a colonial-era prison where many of Myanmar’s most famous dissidents have been detained.

Fenster was pardoned and released with “the goal of maintaining friendly relations between nations,” a state-run Global New Light of Myanmar report said Tuesday.

Richardson visited Myanmar earlier this month for what has been described as a “private humanitarian mission”.

At the time, he said the US State Department had specifically asked him not to raise Window’s case during his visit.

US journalist Danny Fenster, imprisoned in Myanmar, arrives at Hamad International Airport in Doha, the capital of Qatar. US journalist Danny Fenster (left), who has been imprisoned in Myanmar, disembarks from a plane with former US diplomat Bill Richardson upon their arrival at Hamad International Airport in the Qatari capital, Doha. 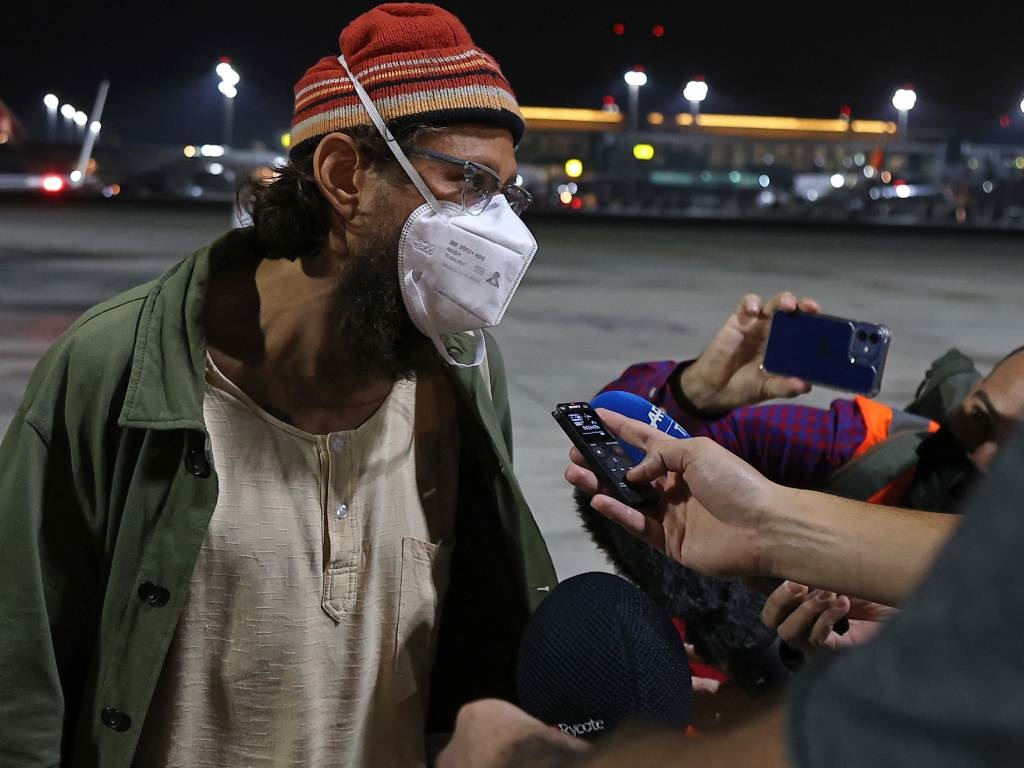 US journalist Danny Fenster, imprisoned in Myanmar, speaks to the press upon his arrival at Hamad International Airport, in the Qatari capital, Doha.

Fenster’s father, Buddy, expressed relief after speaking to his son on the phone, saying there was “nothing more difficult for a parent” than knowing that a child is in trouble and unable to help.

“He slept on a wooden pallet for almost six months. And he said, ‘The plane has a bed in it,’ and I said, you know, ‘Danny, rest, man, lay down on that thing.’ I’m so happy to hear it, ”Buddy said.

The junta said two Japanese envoys, Hideo Watanabe and Yohei Sasakawa, were involved in the negotiations, without giving details.

“This is wonderful news for all of his friends and family,” said Fenster’s colleague at Frontier Myanmar, Andrew Nachemson.

But of course he should never have spent six months in jail … and any local journalists who remain in jail should also be released immediately.

More than 100 reporters were arrested in the coup, according to ASEAN Reporting, a monitoring group. He says at least 30 are still in detention.

We want to hear your views on the news. Subscribe to News24 to be part of the conversation in the comments section of this article.