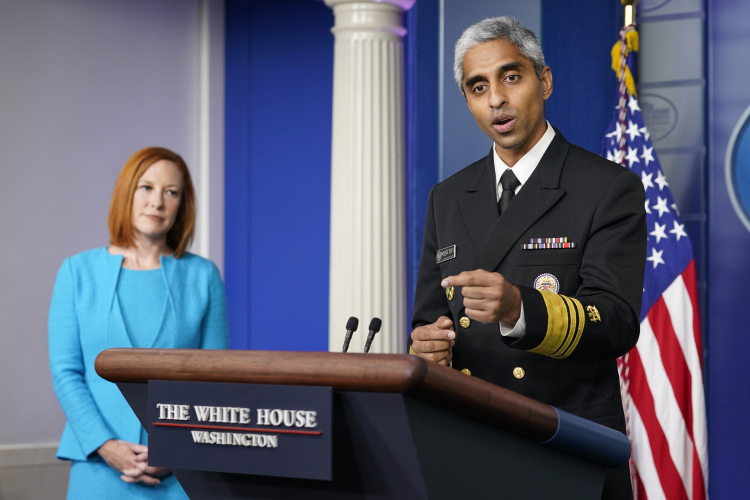 The surgeon general was stern and authoritarian, if not a little out of his usual purview.

Vivek Murthy explained in the White House meeting room this week that the surgeon general’s warnings were “reserved for urgent threats to public health,” an area that generally begins and ends with the human body. The foods we eat. The medications we take. The substances we use and sometimes abuse.

But President Biden’s top physician expanded that sphere of influence on Thursday when he declared that misinformation about the coronavirus was “an imminent and insidious threat to the health of our nation” and then released a 22-page report that included, among others stuff, a full page detailing “what tech platforms can do.”

Murthy claimed that tech giants like Facebook and Twitter are not doing enough to curb the spread of misinformation, particularly about the safety of the COVID vaccine. “Simply put,” he said, “health misinformation has cost us lives.” The administration, he continued, is asking social media companies to do more to monitor bad information, and “we are asking them to consistently take action against super-spreaders of misinformation on their platform.”

White House press secretary Jen Psaki later added that the federal government is “investigating and tracking disinformation.” Furthermore, he said, “we are flagging problematic posts for Facebook that spread disinformation.”

But that science-policy overlap has raised alarm among some who say the White House shouldn’t work with any company to censor anything, not even misinformation about a critically important vaccine.

RealClearPolitics asked the White House to detail your process, specifically how you identify misinformation and flag it to social media companies; how many times have you done it; and for how long have you been doing it. RCP also asked if the administration had First Amendment safeguards in place. “To be very clear,” replied Psaki, “any decision about the use of the platform and who should be on the platform is orchestrated and determined by private sector companies.”

The swing comes at a time when vaccination rates are lagging. The Biden administration achieved significant early success in receiving gunshots, but now vaccinations and outright resistance present major obstacles to getting the job done. Misinformation about side effects, particularly when amplified on social media, has caused some skeptics to skip the vaccine just as a dangerous variant of the virus is spreading. Biden is losing patience.

“They are killing people,” the president said when asked what his message to Facebook was. “The only pandemic we have is among the unvaccinated,” he yelled at reporters over the whirlwind of Marine One’s helicopter rotors. “And they’re killing people.”

The White House insists that all it wants to do is “save lives.” But critics like Rep. Thomas Massie have compared his efforts to the tropes of the dystopian novel “Nineteen Eighty-Four.” The Kentucky Republican accused the White House of “Embezzlement of ‘Ministry of Truth’ level”.

To complicate matters, the definition of what is and what is not disinformation can and does change. For example, the theory that the coronavirus escaped from a biomedical laboratory in Wuhan, China, was largely dismissed early in the pandemic, and mainstream media, including the New York Times and the Washington Post, labeled it as a xenophobic conspiracy theory. Facebook warned its users about spreading “false or misleading” information about the origin of the virus.

But the director of the World Health Organization admitted only on Thursday that it was “premature” to rule out that possibility. “I was a laboratory technician myself, I am an immunologist and I have worked in the laboratory, and laboratory accidents happen,” said WHO Director-General Tedros Adhanom Ghebreyesus. “It is common.”

Whether it’s misinformation about the vaccine or the origin of the virus, the content doesn’t matter. At least that’s what many Republicans say. They argue that coordinating with big tech companies to censor speech is obviously unconstitutional. “The government cannot censor speech. The First Amendment makes it very clear, ”said Utah Sen. Mike Lee. said during an interview with Fox News. “They are a private for-profit corporation that can make its own decisions, but when it does so in collusion with the government, it sounds a lot like a violation of the First Amendment to me.”

One thing is for sure. The White House does not appreciate comparisons to Big Brother or the suggestion that he is snooping on Americans through social media. Fox News White House correspondent Peter Doocy learned a lot when he asked how long the administration has been “spying on people’s Facebook profiles for vaccine misinformation.”

“Well that was quite a loaded and inaccurate question, which I would refute,” Psaki replied.

What happens when the scientific consensus changes? For example, what if the advice previously given by the experts is no longer valid? Doocy noted that Dr. Anthony Fauci’s videos tell people at the beginning of the pandemic not to wear masks. Will the White House ask Facebook to remove those videos? “Dr. Fauci himself has said,” replied Psaki, “that science evolves, information evolves. And we make it publicly available to the American people.”

Melody Redman: Home abortions should only be a temporary measure