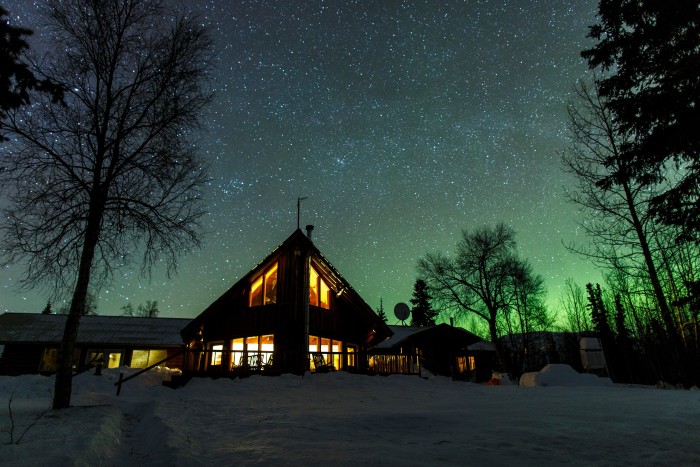 Backcountry Alaska has a lot to recommend – it’s relatively easily accessible from major US West Coast airports and then there’s the sheer volume of Great Wide Open waiting for you – thousands of empty miles of tundra, glaciers, and ample opportunities to admire the Northern Lights. Tucked between the Trimble and Hayes Glacier and the Tordrillo Mountain Range is Winterlake Lodge, a comfortable eco-property run by adventure providers within The Wild. In addition to heli-skiing, glacier trekking, and one-day snowshoeing, Winterlake is known to be a checkpoint on the Iditarod dog sled race, which will celebrate its 50th anniversary in March. It’s the perfect excuse to go in 2022: Winterlake has their own night dog camp on Trimble Glacier, where you can learn sledding ins and outs and cook over the fire. Or you can stay at the lodge and enjoy Chef-owner Kirsten Dixon’s long-standing Iditarod Ice Cream Social, where guests enjoy a delicious dessert spread alongside top dog mushers as they move in and out. Starting at $ 2,400 for a three day minimum stay, insidethewild.com

The Ponant luxury adventure cruise company was created by officers of the French Merchant Navy, with the idea – in the 1980s, still quite innovative – of accessing remote locations on refined and luxurious ships with sustainability as a core value. . Two months ago she launched her first polar exploration vessel: Le Commandant Charcot is a polar-class PC2 ship with 123 cabins, bells and whistles galore – and a state-of-the-art liquefied natural gas-electric hybrid propulsion system that maintains it in line with the mission of entering a little-explored territory without compromising its purity (a research platform and equipment have also been set up for the scientists on board). Antarctic agendas – the Weddell Sea, the Peter I Islands – are at the fore, with a shift to the Northern Hemisphere and Greenland in spring. From € 12,250 for an 11-night itinerary, ponant.com

Zannier is a small but large hotelier; it only has a handful of properties, but these are mapped to Namibia, Cambodia and now Vietnam. It started in Megève in France, however, with an ultra-private mountain ski retreat. Zannier Le Chalet will reopen for the season on December 16 and the novelty is the debut of the property’s private chalet, which has taken over one of its three buildings. Eight bedrooms can accommodate 18 people on three floors; there are two living rooms (one more than a cozy bar / den), a private spa, cinema, and playrooms for children (or adults; And a holiday). The Mont Blanc Unlimited pass also gives you access to Chamonix and Courmayeur; and the chalet team can organize private ski mountaineering, trekking, bobsleigh rides and snow biking. Rooms from $ 590 per night; private chalet from € 150,000 per week, zannierhotels.com

Run towards the Dolomites

Bolzano is Italy’s gateway to skiing paradise: the best mountains in the country and the most historic hotels, from Cortina to Alta Badia, are all easily accessible by car (plus it’s a pretty town). Good news for the direct Dolomites, then, that from mid-December the Sky Alps service launches the direct flight from Gatwick to Bolzano on Wednesdays and Sundays, allowing the perfect ski escape of a long weekend (or a cheeky start of the week). ). The fleet is elegantly equipped with De Havilland Dash DHC-8-Q400 (the “Q” stands for calm down); the payoffs are the pleasures of a few days along the lines of Rosa Alpina (now Aman’s partner hotel) in San Cassiano and La Perla di Corvara: both splendid hotels, both home to great chefs (respectively Norbert Niederkofler and Simone Cantafio – the latter is a protege of Gualtiero Marchesi, just installed and ready to amaze guests). Sky Alpi, from € 135, skyalps.com; Rosa Alpina, from € 620, rosalpina.it. La Perla, from € 550, laperlacorvara.it

A retreat in Reykjavik

If you are looking for a glam holiday in a winter city, think of Reykjavik, where the brand new Edition Hotels has just opened its doors. The Reykjavik edition is right at the heart of the capital’s action – the old port, the shops of Laugavegur Street and various cultural venues are all within easy walking distance. Not that the sleek, newly built five-story interior, designed in Roman and Williams styles, and the rooftop bar-restaurant (with Michelin-starred chef Dill, the highest table in Reykjavik, overseeing lunch), aren’t reasons enough to consider holing up for the duration of your stay. From around £ 404, editionhotels.com