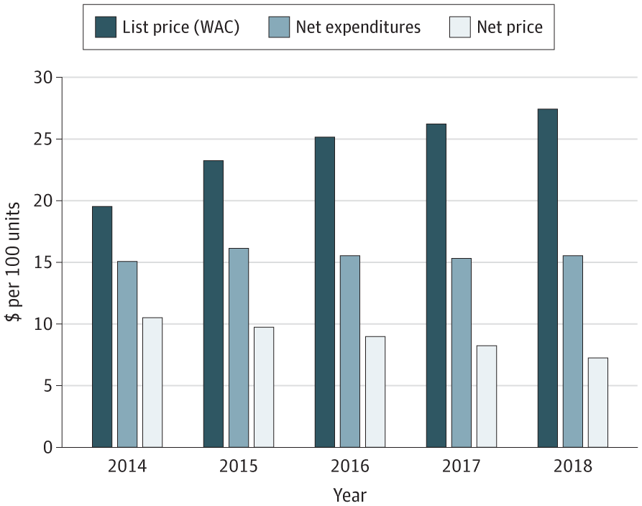 Perhaps surprisingly, the answer is PBMs, not drug manufacturers. This is one of the conclusions discussed in a recent comment by Good and Hernandez (2021). They try to get to the bottom of this question by writing:

Most of the explanations for rising drug costs start with pharmaceutical companies, and in fact they are an easy target. Manufacturers in the United States can set their own prices for new products, which are then protected from competition through patent exclusivity … list prices for branded drugs have increased at an annual average of 9.1% since 2007 to 2018 …
However, the rise in drug list prices is partly mediated by ever-increasing discounts. Therefore, drug manufacturers indicate the net price of drugs (the cost of drugs after all discounts have been applied) rather than the list price as a representation of a more accurate figure of drug costs … previous analyzes indicate that Discounts on branded products accounted for 60% of the increase in drug costs from 2007 to 2018

More empirical details are provided in an article by Van Nuy et al. (2021). Using an approach similar to that used to monitor the flow of funds through the drug distribution system in general (Sodo et al. 2017), find that:

In short, intermediaries (PBMs, pharmacies) are earning increasing shares in the price of insulin relative to drug manufacturers. The graphics below are courtesy of JAMA. Read the entire document here.