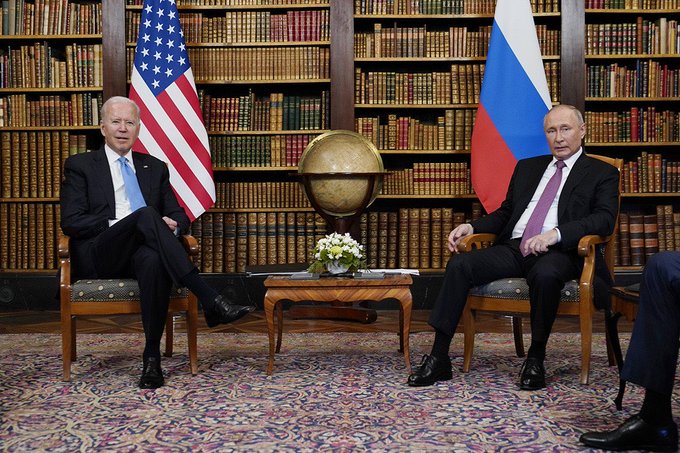 Today in Geneva, an orchestrated Presidential Summit was organized between the President of the United States, Joe Biden, and the President of the Soviet Union, Vladimir Putin, and is currently taking place in Geneva, Switzerland. The grand ceremonies and pomp of these global powers were on full display. This historic meeting and the resulting discussions come at a time when the relationship between these nations is strained and at an important crossroads, especially given the campaign promises of Joe Biden, who vowed to confront and put at bay the antics and actions of Putin and Russia.
The great tensions have intensified over the years until a possible return from the previous “Cold War” or, worse still, the potential for a future nuclear war that would cause catastrophic loss of property and lives.
Key issues and agenda items for the day will include:

1. Russia’s interference in US elections over the years;

2. Russia’s involvement in and support of hacking in US business and government;

5. Human rights concerns and the imprisonment of Alexi Navalny by Russia;

6. The possible exchange of captive Russian and American citizens in the respective countries;

In recent years, Putin has been cold, dismissive and manipulative, especially in his dealings with former US President Donald Trump. Putin also despised former President Barack Obama. Joe Biden has publicly reported that he believes Putin is a murderer. These weren’t exactly words of diplomacy, yet President Biden personally extended the diplomatic request for an invitation to meet to open lines of communication. Biden reiterated to Putin today that “it is better to meet face to face.” Putin started the comment that “we have a lot of accumulated problems and I hope this meeting will be productive.” This is the fifth president of the United States that Putin has met and has held meetings at the Summit. We will see if Biden and Putin can stop the fight or escalate the global conflict.