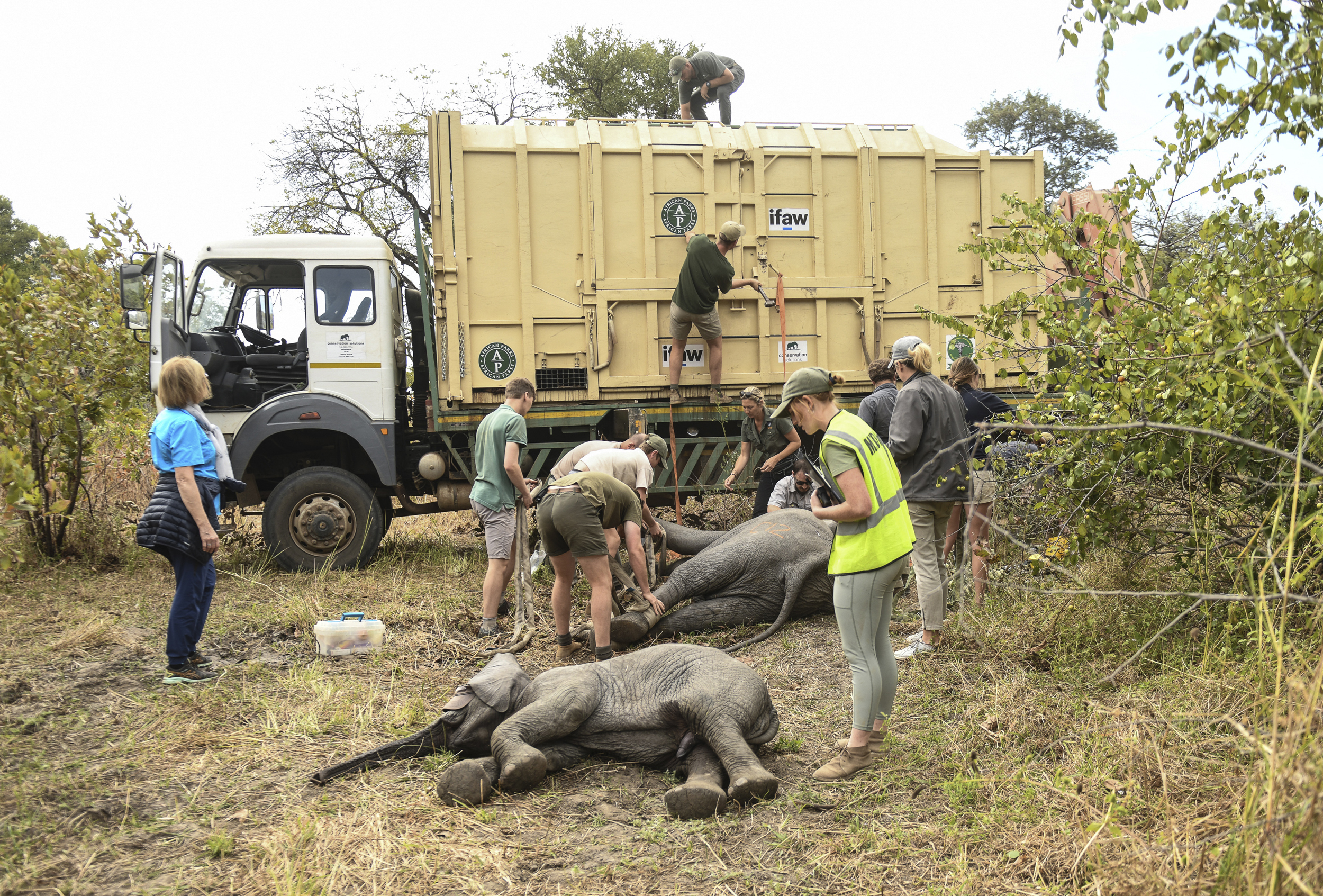 HARARE, Zimbabwe — A helicopter herds thousands of impalas into an enclosure. A crane lifts sedated elephants upside down into trailers. Hordes of rangers herd other animals into metal cages, and a convoy of trucks begins a journey of some 700 kilometers (435 miles) to deliver the animals to their new home.

Zimbabwe has begun moving more than 2,500 wild animals from one reserve in the south to another in the country’s north to rescue them from drought, as the ravages of climate change replace poaching as the biggest threat to wildlife.

Some 400 elephants, 2,000 impalas, 70 giraffes, 50 buffalo, 50 wildebeest, 50 zebras, 50 antelope, 10 lions and a pack of 10 wild dogs are among the animals to be moved from Zimbabwe’s Save Valley Conservancy to three areas of conservation in the north: Sapi, Matusadonha and Chizarira, in one of the largest capture and translocation exercises of live animals in southern Africa.

The “Rewild Zambezi Project,” as the operation is called, is moving the animals to an area in the Zambezi River valley to rebuild wildlife populations there.

It is the first time in 60 years that Zimbabwe has embarked on such a massive internal movement of wildlife. Between 1958 and 1964, when the country was Rhodesia ruled by a white minority, more than 5,000 animals were moved in what was called “Operation Noah”. That operation rescued wildlife from rising waters caused by the construction of a massive hydroelectric dam on the Zambezi River that created one of the world’s largest man-made lakes, Lake Kariba.

This time it is the lack of water that has made it necessary to move the wildlife, as their habitat has dried up from prolonged drought, said Tinashe Farawo, spokesman for the Zimbabwe National Parks and Wildlife Management Authority.

The parks agency issued permits to allow the animals to be moved to prevent “a disaster from happening,” Farawo said.

“We are doing this to relieve pressure. For years we have been fighting poaching and just as we are winning that war, climate change has become the biggest threat to our wildlife,” Farawo told The Associated Press.

“Many of our parks are becoming overcrowded and there is little water or food. The animals end up destroying their own habitat, becoming a danger to themselves and invading neighboring human settlements in search of food, leading to incessant conflict,” he said.

One option would be culling to reduce the number of wildlife, but conservation groups say such killings are cruel. Zimbabwe carried out the last culling in 1987, Farawo said.

The effects of climate change on wildlife are not limited to Zimbabwe. Throughout Africa, national parks that are home to countless species of wildlife, such as lions, elephants and buffalo. are increasingly threatened by below-average rainfall and new infrastructure projects. Authorities and experts say the drought has seriously threatened species such as rhinos, giraffes and antelopes by reducing the amount of food available.

For example, a recent study in South Africa’s Kruger National Park linked extreme weather events to the loss of plants and animals, unable to cope with drastic conditions, and lack of water due to longer dry spells and higher temperatures. .

The massive movement is supported by the Great Plains Foundation, a nonprofit organization that works “to conserve and expand natural habitats in Africa through innovative conservation initiatives,” according to its website. The organization is working with the Zimbabwe National Parks and Wildlife Management Authority, local experts, the Center for Environmental Forensic Sciences at the University of Washington-Seattle and the Department of Zoology at the University of Oxford, according to the website.

One of the new homes for animals relocated to Zimbabwe is the Sapi Reserve. The 280,000-acre privately owned concession is located to the east of the UNESCO World Heritage-listed Mana Pools National Park, known for its splendid location along the Zambezi River, which forms the border between Zimbabwe and Zambia.

Sapi “is the perfect solution for many reasons,” Great Plains CEO Dereck Joubert said on the foundation’s website.

“This reserve forms the middle Zambezi biosphere, totaling 1.6 million acres,” Joubert wrote. “From the 1950s until we took over in 2017, decades of hunting had decimated wildlife populations in the Sapi Reserve. We are rebuilding and restoring the wilderness to what it once was.”

Share
Facebook
Twitter
Pinterest
WhatsApp
Previous articleOmicron COVID-19 booster shots are coming: Will they be a game changer?
Next articleScientists find a new asteroid crater that may shed light on the extinction of the dinosaurs
RELATED ARTICLES
SCIENCE

CDC: Unvaccinated are 14 times more likely to get monkeypox

The World Health Organization (WHO) and nearly 200 other health associations have issued an unprecedented call for a global fossil fuel non-proliferation treaty.A call...
Read more

HELSINKI -- Hollywood's Brad Pitt and Australian musician Nick Cave have made their artist debuts at an exhibition in Finland showcasing sculptures and ceramics...
Read more